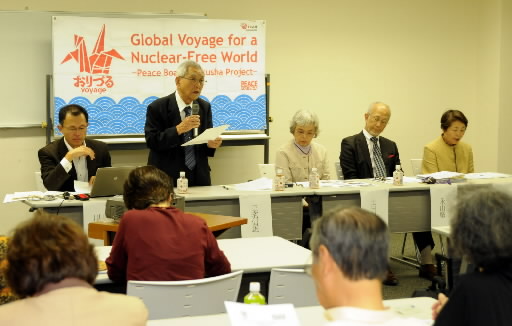 Four A-bomb survivors from Hiroshima, who shared their accounts of the atomic bombing while visiting the de facto nuclear weapon state of Israel in September, spoke about their impressions of this trip in Tokyo on October 15. While acknowledging the hard reality of Israel’s determination to hold a nuclear arsenal for its national security, the survivors stressed the importance of continuing to convey the horror that nuclear weapons bring.

The four, who now reside in the Tokyo metropolitan area, experienced the atomic bombing at different ages, from one to 16 years old. They were dispatched to Israel by Peace Boat, an NGO engaged in delivering accounts of the atomic bombings in various nations, while the Ministry of Foreign Affairs designated the survivors “Special Communicators for a World without Nuclear Weapons.” Received by a local NGO called the Israel Disarmament Movement, they stayed in Israel from September 10 to 16 and told their stories in three cities. According to the Japan Confederation of A- and H-bomb Sufferers Organizations, it was the first formal opportunity for A-bomb accounts to be shared in Israel.

About 30 people were present at the debriefing in Tokyo. Nobuo Miyake, 83, a resident of Saitama Prefecture, said that the response in Israel was positive, pointing to the applause given after their accounts. At the same time, the local media peppered them with questions involving the rights and wrongs of nuclear weapons possession, leaving him with a sharp impression. “I sensed the hard reality of the nuclear weapons issue in the Middle East,” he said. “I stressed to them that the idea of nuclear deterrence is an illusion.”

Iwao Nagayama, 69, a resident of Chiba, said he was surprised to hear one local participant say publicly that Israel should rid itself of nuclear weapons. He felt keenly that “the people’s wish for peace is strong.” Kazumi Tsuchida, 72, a resident of Saitama Prefecture, and Nobuko Sugino, 68, a resident of Tokyo, said that the visit to Israel reaffirmed for them the preciousness of peace.