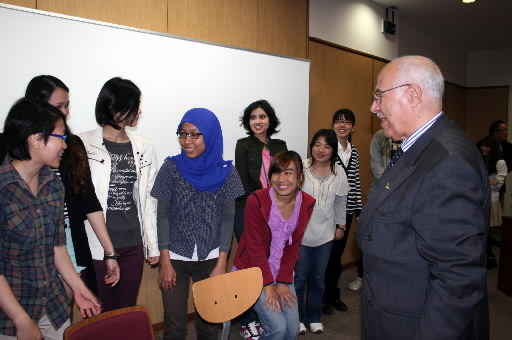 Mohamed Bashir Ali Kurdi, 76, the former Saudi ambassador to Japan, paid a visit to Hiroshima Jogakuin University on October 12 to interact with students. Saudi Arabia and the Hiroshima school, located in Higashi Ward, plan to deepen their ties of friendship by pursuing an exchange program for Saudi and Japanese students.

The former ambassador spoke to an audience of about 40 people, including students from the Department of Liberal Arts and international students currently studying at the university. “As a result of the Great East Japan Earthquake,” Mr. Kurdi said, “the people of the world learned many things from the Japanese people about the virtue of humility and the importance of strong bonds with others. I look forward to Japan and Saudi Arabia maintaining our friendly ties.”

Afterward, at a question and answer session, the ambassador touched on his nation’s past, when Saudi women were unable to attend school or travel. He then explained, “But now the percentage of women going to college in Saudi Arabia is higher than that of men. People can now communicate freely with others overseas through various ways, including telephone calls made over the Internet.” He offered his audience some dates, a trademark fruit of Saudi Arabia.

Yoshie Ninokata, 18, a first-year student at the school, said, “It was a good chance to learn about Saudi Arabia, a nation I’m not familiar with. I hope I can go there in the future.”

Through his tenure as ambassador to Japan from 1998 to 2001, Mr. Kurdi became acquainted with Shinichiro Kurose, chair of the board of trustees of Hiroshima Jogakuin University. The former ambassador is visiting Japan to attend “Saudi Week in Osaka,” an event organized by the Saudi Arabia Higher Education Ministry and other entities. Taking this opportunity, the ambassador paid a visit to Hiroshima, too.