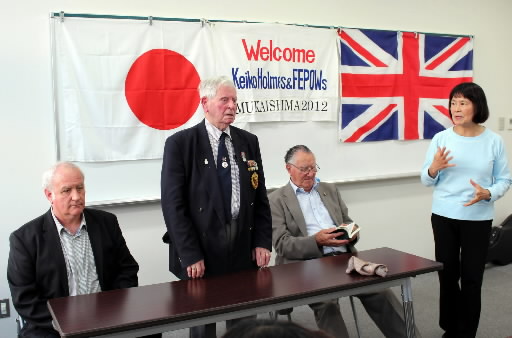 Former British soldiers, held as prisoners of war by the Japanese military during World War II, along with family members of deceased servicemen, visited the city of Onomichi, Hiroshima Prefecture on October 23. They paid a visit to a former POW camp in Mukaishima-cho and took part in a gathering at which they shared their experiences of captivity during the war. They also engaged in exchange activities with local citizens.

Keiko Holms, 64, living in the United Kingdom, took the party of ten, including two former POWs and family members of soldiers who have since passed away. At a gathering held at Onomichi Shimin Center Mukaishima, Sam Harris, 92, offered his account of the time he spent at a POW camp in Hokkaido, where he was forced to endure bitterly cold conditions and hard labor at a coal mine.

Ken Pett, 92, who was detained as a POW in Taiwan for three and a half years, is visiting Japan for the first time. He acknowledged that he had not forgiven Japan all these years, but said, “I’m pleased to know that the Japanese people have not forgotten the existence of the POW camps.”

About 20 citizens took part in the gathering. Naoko Mizobuchi, 48, a nurse and resident of Onomichi, said, “When I heard their painful experiences, it renewed my desire for peace.”

Before the event, the group visited a monument commemorating friendship between Japan and the United Kingdom, located in Mukaishima-cho, and the site of a memorial plaque which remembers the 23 British soldiers who died in the POW camp there. The British party arrived in Japan on October 15 and will return home on October 29 after visiting such places as Hiroshima Peace Memorial Park and the Commonwealth War Cemetery in Yokohama.