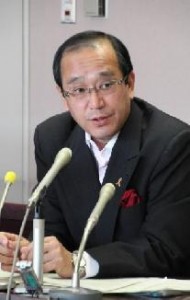 With the Japanese government declining to sign a statement supported by over 30 nations which urges all countries to take action to make nuclear weapons illegal under international law, Hiroshima Mayor Kazumi Matsui has displayed a cautious stance with respect to pressing the Japanese government to reconsider its position. Meanwhile, the mayor of Nagasaki, Tomihisa Taue, visited the Ministry of Foreign Affairs in person to urge the government to sign the statement. Organizations of A-bomb survivors in Hiroshima have raised questions over the different responses of the two A-bombed cities.

At a press conference held on October 24, Mr. Matsui praised the anti-nuclear statement. “The statement is in keeping with the philosophy of nuclear disarmament that the Japanese government has proposed,” he said. “And it affirms the appeal being made by the A-bombed city of Hiroshima, asserting that nuclear weapons are an absolute evil and must therefore be eliminated.” The mayor went on to say that he will call for the Japanese government to strengthen its support for the nations that are backing the statement.

Mr. Matsui, however, stopped short of mentioning concrete steps he would pursue to persuade the government to back the statement. Touching upon the fact that Mr. Taue paid a visit to the Ministry of Foreign Affairs on October 19, Mr. Matsui said, “After learning more about the circumstances involving his request, I will consider how to respond.”

The central government is reluctant to lend its support to the statement out of concerns over the potential impact on the “nuclear umbrella” provided by the United States. Offering some background to explain his cautious stance, Mr. Matsui shared his perspective by saying, “I’m caught in a dilemma over the extent to which Hiroshima, which champions peace, should speak out to the central government, which holds a different view on the idea of nuclear deterrence.”

A-bomb survivors in Hiroshima are expressing dissatisfaction over the city’s position. Toshiyuki Mimaki, 70, secretary general of the Hiroshima Prefectural Confederation of A-bomb Sufferers Organizations, chaired by Sunao Tsuboi, criticized the hesitation shown by the mayor. “The mayor of Hiroshima should not be worried about the Japanese government,” he said. “On behalf of the survivors’ voices, the city of Hiroshima must take the lead in speaking out.”

Kazuo Okoshi, 72, secretary general of the other faction of the Hiroshima Prefectural Confederation of A-bomb Sufferers Organizations, chaired by Kazushi Kaneko said, “The response from the city of Hiroshima is tantamount to condoning the position of the Japanese government and its reliance on the nuclear umbrella. It disappoints me.”