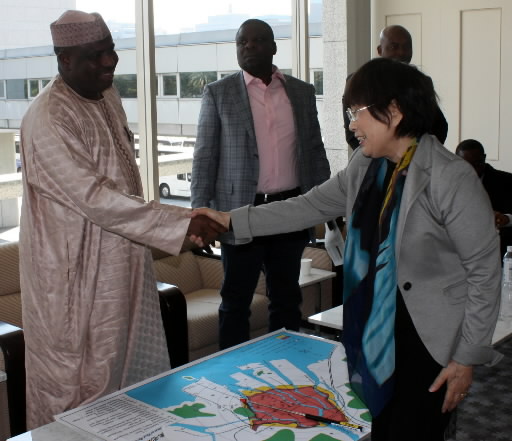 Aminu Tambuwal Waziri, 46, speaker of Nigeria’s House of Representatives, paid a visit to Hiroshima Peace Memorial Park on October 25 to learn about the destruction caused by the atomic bombing.

After laying flowers at the Cenotaph for the A-bomb Victims, Mr. Waziri toured Hiroshima Peace Memorial Museum, guided by Koichiro Maeda, the museum’s director. In the museum, Mr. Waziri studied the artifacts on display, including mementos left by A-bomb victims, and listened to the A-bomb account of Keiko Ogura, 75, who was exposed to the atomic bombing at a location 2.4 kilometers from the hypocenter.

“This visit has renewed my thoughts on the preciousness of peace,” the speaker said. “Such tragedies wrought by nuclear weapons must never be repeated.” Mr. Waziri arrived in Japan on October 21, his first visit to this nation, at the invitation of Japan’s Lower House. The stop in Hiroshima was arranged at his request.