Students gather to remember Sadako, pledge to pass on her wish for peace 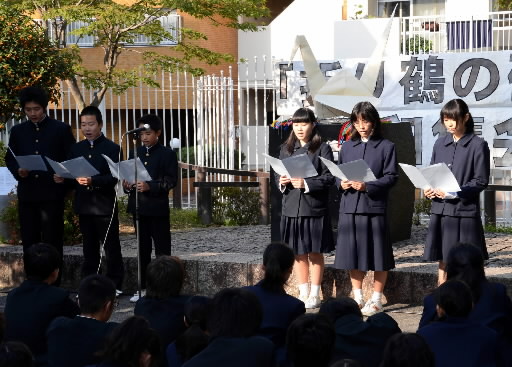 Commemorating the anniversary of Sadako Sasaki’s death on October 25, students at Noboricho Junior High School, located in downtown Hiroshima, held a peace gathering on that day. Sadako was a Hiroshima native who was exposed to the atomic bombing at the age of two, then died ten years later from leukemia, an after-effect of the A-bomb’s radiation. She had been enrolled at Noboricho Junior High School prior to her death. The roughly 240 students at the school stood before a memorial on the school grounds and turned their thoughts to the preciousness of peace.

The students observed a moment of silence for children who have fallen victim to war and terrorist acts. They offered a total of 2,000 paper cranes to the memorial, placing on top a large paper crane folded from a 2.5 square meter piece of paper. Six third-year students read out a message on behalf of the student body, pledging, “We will pass on Sadako’s wish for peace to the future.”

Paper cranes, folded by Sadako while in the hospital in hope of a recovery, have become a symbol of the wish for peace. Noboricho Junior High School raised the schoolyard monument in 2000 to hand down Sadako’s wish. Since then, the school has held an annual gathering at the memorial around the day Sadako passed away.

Aya Nishimura, 14, a third-year student, said, “Creating a peaceful world is hard, but we’d like to begin by showing respect for our friends.”