Journalists from Europe visit Hiroshima to learn about A-bomb consequences 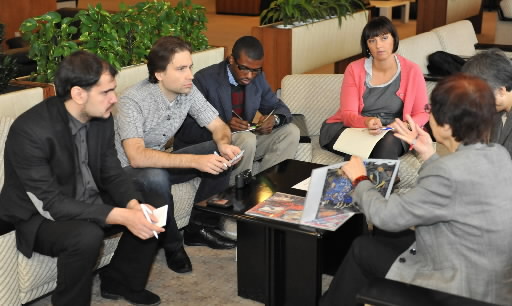 Four journalists from four nations, including the United Kingdom, visited Hiroshima between November 25 and 27 to pursue coverage of A-bomb survivors and other figures in the city. The journalists were invited by the European Reporters Fellowship Program, a project organized by the Japan Newspaper Publishers & Editors Association (NSK).

The four journalists, in their 20s and 30s, are Lukas Kovanda, a senior analyst at the Czech magazine Tyden; Mette Dyrskjot, a reporter at the Danish newspaper Dagbladet Borsen; Marian Pavalasc, a reporter at the Romanian newspaper Evenimentul Zilei; and Aaron Akinyemi, an assistant producer at the BBC (British Broadcasting Corporation).

On November 26, they visited the Chugoku Shimbun to meet with Yoshinori Okatani, the president of the company. They exchanged views with Mr. Okatani on such issues as nuclear power plants. The group also spoke with Akira Tashiro, the executive director of the Hiroshima Peace Media Center (HPMC), a wing of the Chugoku Shimbun charged with disseminating the newspaper’s peace-related reporting via an English-language website. Mr. Tashiro explained the Chugoku Shimbun’s coverage of the atomic bombing and peace issues as well as the efforts of the HPMC.

Afterward, they listened to the A-bomb account of Emiko Okada, 75, who experienced the bombing while at home, about 2.8 kilometers from the hypocenter, when she was eight years old.

Ms. Okada described the horrific scenes she witnessed while fleeing with her mother and younger brother, and explained how scores of children were killed in the blast because they had been mobilized to work outdoors that day, helping to dismantle houses to create a fire lane. One of these students was her sister, four years older than her. Ms. Okada stressed to the journalists, “This tragedy must never be repeated. There are still 20,000 nuclear weapons in the world. I hope all of us, as global citizens, will work to eliminate nuclear weapons from the earth.”

The journalists posed a number of questions to Ms. Okada, such as “What are your thoughts on nuclear energy since the accident at the nuclear power plant in Fukushima?” and “What do you think of relations between Japan and China?”

Afterward, all four journalists offered their impressions of the meeting. “Ms. Okada’s recollections left a strong impression,” Mr. Kovanda said. “The experience she endured was so devastating that, even now for example, the sight of a sunset is a fearful reminder of the flames that destroyed the city after the bombing. It’s very sad, and as I’ve said, her story really moved me.” Ms. Dyrskjot added, “I had already read a lot about the A-bomb and seen photographs, but hearing Ms. Okada describe details of the experience had a powerful impact. I’m also impressed by her efforts for peace in the world and her trip to India.” Mr. Pavalasc said, “Ms. Okada offered a vivid picture of the Hiroshima bombing, and such details are always helpful for journalists seeking to write a strong article.” And Mr. Akinyemi commented, “I thought that Ms. Okada’s story was interesting, informative, and very engaging.”

Following the meeting, the group moved to Hiroshima Peace Memorial Park to visit Peace Memorial Museum. They also made a stop at the Radiation Effects Research Foundation, located in Minami Ward, to learn about the effects of radiation and related issues.

The four journalists arrived in Japan on November 18. After also gathering information at such organizations as an automobile maker, the Bank of Japan, and the Nuclear Power Regulatory Agency, they departed Japan on November 30.