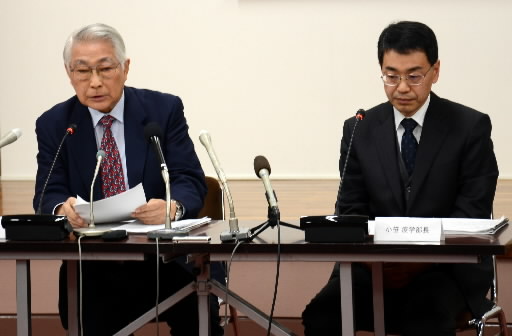 On December 7, the Radiation Effects Research Foundation (RERF), located in Minami Ward, Hiroshima, announced the results of its analysis of over 13,000 people who said they were exposed to the “black rain” that fell in the aftermath of the atomic bombings of Hiroshima and Nagasaki. RERF said that it had found no indication of a higher risk of developing cancer in those who had been exposed to the black rain, which contained radioactive substances.

In November 2011, it was learned that RERF had pursued research regarding the effects of the black rain, from around 1955 to 1961, and then stored the data. As there was little investigation into the impact of the black rain to human health following the bombing, this data drew considerable attention. Some experts, though, questioned the methodology used in that probe.

The data were part of responses received from a total of 120,000 people in Hiroshima and Nagasaki who were interviewed by the Atomic Bomb Casualty Commission (ABCC), RERF’s former name. Of this number, roughly 13,000 people affirmed that they were exposed to black rain that fell in the aftermath of the atomic bombing. Most of this group were in Hiroshima at the time. The interview covered such questions as the location of exposure and whether or not they experienced acute symptoms of radiation sickness, including hair loss.

Among the 120,000 respondents, RERF selected 86,671 people, excluding those whose direct radiation levels were unknown. The number of people who said they were exposed to the black rain totaled 11,667 out of 58,535 in Hiroshima and 734 of 28,136 in Nagasaki. RERF then compared the ratios of deaths caused by solid cancers and leukemia and the development of such illnesses by the year 2003 between those exposed to the rain and those who were not exposed.

Based on this analysis, RERF has concluded that there is no increase in health risks resulting from exposure to the black rain. Among those who were exposed to rain in Nagasaki, 100 people died of solid cancers. This figure indicates a risk approximately 30 percent higher than average, but RERF attributes this to “the small number of 734 out of the general population.”

Toshiteru Okubo, the chairman of RERF, again stressed that “The data is not strong enough to be used for scientific analysis, as it is statistically biased.”

In contrast, Megu Ohtaki, a professor of applied statistics at Hiroshima University’s Research Institute of Radiation Biology and Medicine (RIRBM), located in Minami Ward, pointed out, “This data is significant, because there is no other large-scale research study which pursued such a range of information, including symptoms following exposure to the black rain. The analysis was very rough, so there is room to study the data with more precision.”

RERF launched this study in line with requests made by the City of Hiroshima and A-bomb survivors’ organizations in December of last year.

On December 7, the Radiation Effects Research Foundation (RERF), located in Minami Ward, Hiroshima, announced the results of its analysis of data involving a survey of about 13,000 A-bomb survivors. Experts in the A-bombed cities, who have been seeking to clarify the actual effects on human health caused by the black rain which fell in the immediate aftermath of the atomic bombing, called for continuing analysis, saying, “RERF has not made full use of this significant data.”

The focus of this analysis was on whether or not clues could be obtained regarding the risk of cancer and the onset of effects on the human body as a result of exposure to the black rain.

Koya Honda, the president of the Nagasaki Doctor and Dentist Association, who discovered the presence of the data and alerted RERF to this fact in the fall of 2011, commented: “The results do not meet the expectations of the people who were exposed to the black rain.”

RERF has maintained reluctance toward the use of this data, questioning its reliability. Masaharu Hoshi, a professor emeritus at Hiroshima University and a specialist in radiation biology and physics, responded, “RERF should pursue further analysis of the data and add outside experts as well.”

In the wake of the accident at the Fukushima No. 1 (Daiichi) nuclear power station, there is now keen interest among the public in the issues of low-dose radiation exposure and internal exposure to radiation, both of which are related to the black rain. Masaaki Takano, 74, the chairman of the Hiroshima Prefecture Atomic Bomb Black Rain Council and a resident of Saeki Ward, stressed, “Proper analysis can be useful not only for the people who were exposed to the black rain, but also for the people of Fukushima, who are frightened of radiation exposure, too.”

The Radiation Effects Research Foundation (RERF)
RERF was established in the city of Hiroshima in 1947 by the U.S. National Academy of Sciences. It was then known as the Atomic Bomb Casualty Commission (ABCC) and it pursued research on the health effects of radiation released by the atomic bomb. In 1975, ABCC was reorganized and became the Radiation Effects Research Foundation, a joint effort of the governments of Japan and the United States. With research institutes located in Minami Ward, Hiroshima, and the city of Nagasaki, RERF investigates issues involving the impact of radiation, including its effects on the health of A-bomb survivors and the children of survivors.