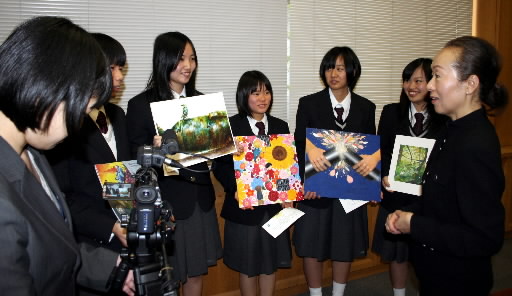 The Harmony for Peace Foundation, based in the United States, is producing a 30-minute film featuring contestants of a children’s art contest. The foundation is pursuing interviews with contestants in various countries about their wishes for peace. The art contest, on the theme of a peaceful world without nuclear weapons, was held this year by the Harmony for Peace Foundation and the United Nations. Tomoko Torii, president and executive director of the foundation, and a resident of the U.S. state of Pennsylvania, visited Funairi High School and Motomachi High School in downtown Hiroshima for filming.

Ms. Torii visited Funairi High School on December 4. She interviewed five students who took part in the contest, including Ai Yamanaka, 17. Ms. Yamanaka, a second-year student who lives in Naka Ward, won second prize in the 13- to 17-year-old category of this international contest. They were interviewed about their motives for participating in the contest and the messages expressed in their works.

“I wanted to put into my picture what I’ve learned in my peace studies class,” said Ms. Yamanaka, before the video camera, who sought to express the folly of nuclear weapons in her art. Another picture, made by Marika Hayashi, 18, shows nuclear weapons, unused, in the woods. Ms. Hayashi, a third-year student who lives in Minami Ward, said, “While I was working on my picture, my grandmother told me about her experience of the war. I want to understand what it was really like back then.”

The United Nations is supporting the production of the film. U.N. Secretary-General Ban Ki-moon, as well as other prize winners from such countries as Thailand and Malaysia, will also be interviewed for the film, to be completed by next summer. The film will be shown at the exhibitions of prize-winning works slated for Hiroshima and New York, and at peace events in the United States. Ms. Torii said that she would like the world to hear the voices of these young people, calling for a world without nuclear weapons.