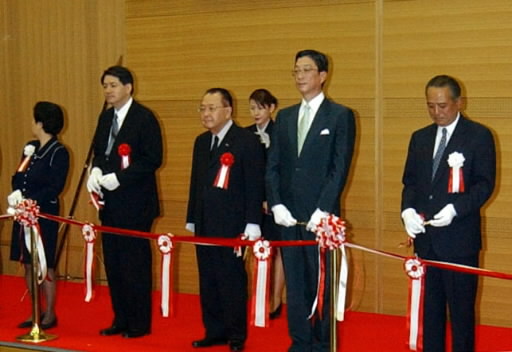 Daniel Inouye, the senator from the U.S. state of Hawaii and the first Japanese-American congressman, died on December 17. He was 88. Mr. Inouye had formed deep ties with Hiroshima through visits to this city in connection with friendship programs involving Hiroshima Prefecture and the state of Hawaii, among other activities. He also expressed support for President Barack Obama when Mr. Obama indicated his desire to one day pay a visit to the A-bombed cities of Hiroshima and Nagasaki. The Hiroshima prefectural government will soon send a telegram to share its condolences.

Mr. Inouye paid a four-day visit to Hiroshima in May 2002, attending ceremonies commemorating the fifth anniversary of official ties of friendship between Hiroshima Prefecture and the state of Hawaii and taking part in the opening ceremony of a special exhibit designed to convey the history of immigration from Hiroshima to Hawaii.

Kenji Aihara, the director of the Hiro Citizens’ Center of Kure City, was introduced to Mr. Inouye by the Hiroshima prefectural government in 2002. At the time, Mr. Aihara was engaged in collecting artifacts for the Yamato Museum, which was preparing to open in the city of Kure. Recalling his interactions with Mr. Inouye, Mr. Aihara said, “The senator said to let him know if I needed any support. He was a kindhearted person with a special aura about him.”

In 2011, at a press conference held by the Japan National Press Club in Tokyo, Mr. Inouye expressed his support for a visit to the A-bombed cities by Mr. Obama after the president had previously stated that he would be “honored” to make such a trip during his time in office. The senator went on to acknowledge that the idea of an American president visiting the A-bombed cities has drawn a mixed reaction in the United States, but said his enthusiasm stems from the fact that his mother was originally from Hiroshima.

In August 2012, marking the 15th anniversary of ties between their two areas, Hiroshima Governor Hidehiko Yuzaki met with Mr. Inouye in Hawaii. Commenting on the senator’s passing, Mr. Yuzaki said, “The senator supported Hiroshima’s identity as a peace city. We have lost a great man who was sympathetic to our cause.”