Keiji Nakazawa dies: Carrying on the spirit of “Gen” 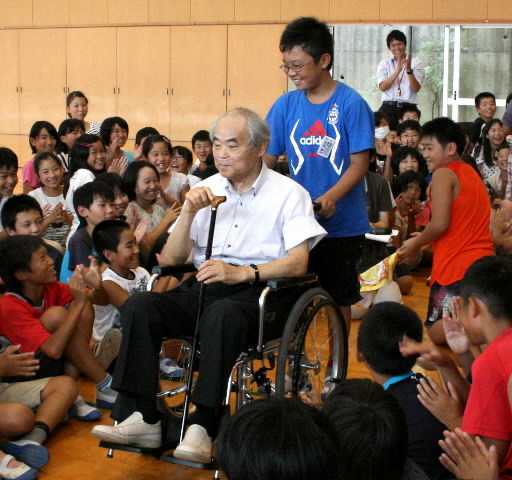 The news of the death of manga artist Keiji Nakazawa, which was received in Hiroshima on December 25, sent shock waves throughout the city. Many people expressed regret at the death of the author of “Barefoot Gen” and said they had hoped he would have more opportunities to recount his experiences. Mr. Nakazawa was an indomitable man who continued to tell of the cruelty of the atomic bomb and war, which deprived him of his family, through his manga and peace education. His friends expressed regret over his unexpected death.

In September Mr. Nakazawa attended a gathering at Yanominami Elementary School in Hiroshima’s Aki Ward. He had promised to plant wheat with the students in November but had to cancel on account of his poor health. “I would like the children to be strong like wheat, as he would have wished,” said Hironobu Butsuen, 57, principal of the school. Miyoko Kono, 65, an obstetrician and gynecologist who was like a member of Mr. Nakazawa’s family, lamented his untimely death. “At his birthday party this year he said he hoped to live to 80,” she said.

Next year will mark the 40th anniversary of the start of the serialization of “Barefoot Gen.” The Peace Memorial Museum, to which Mr. Nakazawa donated more than 10,000 items, including original drawings, was planning an exhibition to mark the occasion. “When I asked him to open the exhibition, he said he would be there,” said Koichiro Maeda, 64, director of the museum. Upon learning of Mr. Nakazawa’s death, Mr. Maeda announced that a special exhibition would be held in January. “Mr. Nakazawa conveyed the horror of the atomic bombing across generations and across borders,” Mr. Maeda said. “He was a very influential man.”

Hiroshima resident Kuniko Watanabe, 32, who was involved in the production of a documentary on Mr. Nakazawa, and other volunteers are organizing a special event to commemorate the 40th anniversary of the publication of “Barefoot Gen.” She noted that Mr. Nakazawa was in the habit of saying, “It will be the young generation’s turn next.” “I would like to heed that call,” she said.

Sunao Tsuboi, 87, chairman of the Hiroshima Prefectural Confederation of A-bomb Sufferers Organizations, said, “I would like to take up where he left off and convey to the world the desire for the abolition of nuclear weapons that he put into his work.” In an interview following Mr. Nakazawa’s death, Kazumi Matsui, mayor of Hiroshima, said, “Based on his strong belief that there must be no atomic bombs, he conveyed the reality of the A-bombing. His death is truly unfortunate.”

“Frequent bouts of pneumonia had left him very weak,” Mr. Nakazawa’s wife, Misayo, 70, said. “At the end he just drifted off with a tender look on his face. His friends in Hiroshima gave him their support. He said, ‘I’m a happy man. I’ve done everything I wanted to do.’”