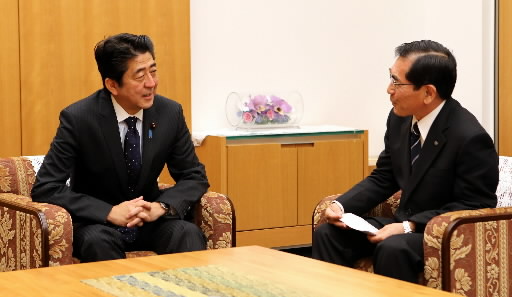 Japanese Prime Minister Shinzo Abe, from the Yamaguchi No. 4 constituency, sat for an exclusive interview with Yoshinori Okatani, the president of the Chugoku Shimbun, at the prime minister’s official residence. Looking ahead to this new year, Mr. Abe stated unequivocally that he will maintain the nation’s “three non-nuclear principles” and, in its role as the A-bombed nation, pursue efforts to advance nuclear disarmament. The prime minister also indicated that he will reach a decision on whether to join the Trans-Pacific Partnership (TPP) based on the U.S. response and other considerations.

Mr. Abe said clearly that Japan “will maintain the three non-nuclear principles” and “take a leadership role to have a resolution on the abolition of nuclear weapons adopted at the United Nations.” The prime minister stressed that this stance has not shifted in the least.

Mr. Abe went on to say: “In terms of nuclear disarmament, we must consider how progress can be made in reality. As the A-bombed nation, Japan will make efforts on the international stage to advance nuclear disarmament in the world.”

With regard to the Trans-Pacific Partnership, which would also impact the Chugoku region, including Hiroshima and Yamaguchi prefectures, the prime minister said, “Japan cannot take part in the negotiations as long as the elimination of tariffs without sanctuary is a prerequisite for the discussion.” This is a position in keeping with the campaign pledge made by the Liberal Democratic Party in the Lower House election held this past December. At the same time, Mr. Abe stated, referring to the upcoming Japan-U.S. summit, “Japan and the United States are allies, and the two nations will conduct our negotiations as allies.”

As for the nation’s fleet of nuclear power plants, Mr. Abe reaffirmed that he will make a decision on restarting the power stations in three years after taking into account such factors as the demand for electricity. On the subject of the Kaminoseki nuclear power plant in the town of Kaminoseki, Yamaguchi Prefecture, which the Chugoku Electric Power Company envisions constructing, the prime minister said that he would respect the policy set by Shigetaro Yamamoto, the governor of Yamaguchi Prefecture, to freeze the plan.

The U.S. military has designated the U.S. Marine Corps Air Station Iwakuni, in Iwakuni, Yamaguchi Prefecture, as a fueling base for the MV-22 tilt-rotor Osprey transport aircraft. Commenting on this issue, Mr. Abe said that the central government will take steps to ease the public’s anxiety. “It’s vital to remove the concerns held by the local residents,” he said.

With regard to the nation’s struggling economy, the prime minister pointed out: “Previous responses, including measures taken by the Bank of Japan, have not had an impact in the midst of this prolonged period of deflation.” Referring to the recent correction of the yen’s appreciation and rising stock prices, Mr. Abe said, “The markets responded to my assertion that the new phase of monetary policy must be initiated.” He stressed his intention to accelerate plans to revitalize the economy by focusing on monetary relaxation and other measures.