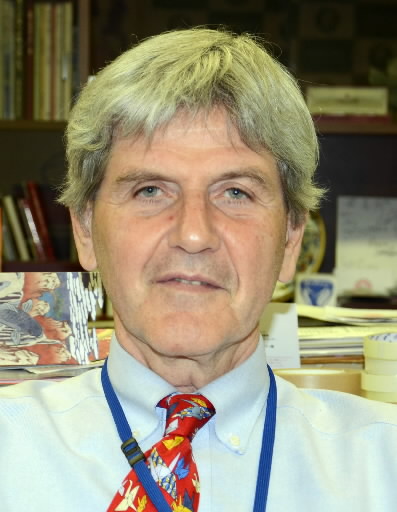 On January 10, it was learned that Steven Leeper, 65, chair of the Hiroshima Peace Culture Foundation, a body under the auspices of the City of Hiroshima, will resign at the end of March. His tenure was scheduled to end at a May meeting of the board of trustees. Mr. Leeper explained his resignation by citing the need to care for family members back in the United States.

Mr. Leeper assumed the position of chair in 2007, the first foreign national to be given this post at the foundation, which plays an important role in the administration of peace activities in the city. He has been engaged in international efforts to advance the abolition of nuclear weapons, including expanding the number of member cities of Mayors for Peace internationally. The secretariat of Mayors for Peace is located at the foundation and Mr. Leeper has made use of his grassroots network of NGOs in the world to achieve this aim.

In an interview with the Chugoku Shimbun, Mr. Leeper said he took the health of family members and his own age into consideration as he made the decision to resign. He indicated that he will return to the United States in April, with Atlanta as a base for his continuing peace activities. “I hope to maintain my support for Hiroshima’s efforts for peace in the future, too,” he added.

Mr. Leeper said that he shared his intention to resign with Hiroshima Mayor Kazumi Matsui, who serves as president of the Hiroshima Peace Culture Foundation, in November 2012 and that the mayor accepted his resignation. The City of Hiroshima is now contemplating his successor.

Steven Leeper is from the U.S. state of Illinois. He came to Japan in 1973 and became involved in peace activities while working as a translator and interpreter. In 2002, he was made a staff member of the secretariat for Mayors for Peace. Then, in April 2007, Tadatoshi Akiba, who was mayor of Hiroshima at the time, appointed him to be the eighth chair of the Hiroshima Peace Culture Foundation.