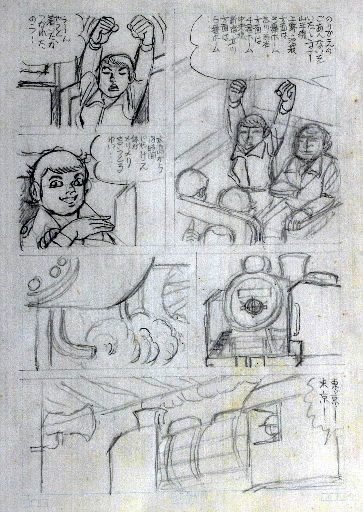 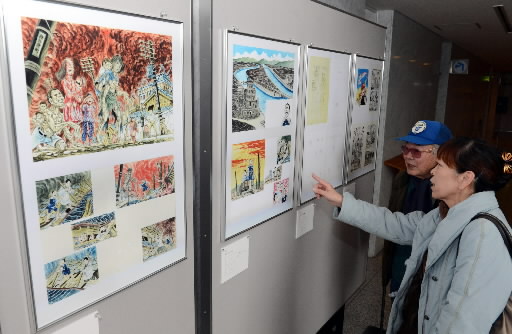 An exhibition of drawings by Keiji Nakazawa, held in memory of the late manga artist, who died on December 19 at the age of 73, opened on January 10 at Hiroshima Peace Memorial Museum. Mr. Nakazawa created the manga Barefoot Gen based on his personal experience of the atomic bombing and its aftermath. This exhibition is the first to show to the public reproductions of Mr. Nakazawa’s pictures for the second part of Barefoot Gen, which he did not complete.

On display are a total of 30 reproductions of drawings from six works, including the manga and picture book versions of Barefoot Gen and Kuroi Ame ni Utarete (Struck by Black Rain), in which Mr. Nakazawa took up the atomic bombing as a theme for his manga for the first time. The museum selected these drawings from about 9,500 items donated by the author in February 2011.

Mr. Nakazawa suffered from cataracts, and as the condition worsened, he was forced to give up his goal of completing the second part of the story while working on its first installment. He planned to depict Gen’s life after the protagonist had moved to Tokyo to study painting as a young adult.

The first four pages of the 16-page installment are on display at the exhibition. These pages include drafts of the scenes in which Gen has just arrived at Tokyo Station by train. One page is divided into panels, but includes only dialogue, not drawings, revealing the artist’s creative process to visitors.

The exhibition runs until January 31 and admission is free. Koichiro Maeda, the director of the museum, said, “You can see his unique brush strokes in these pictures. I hope people will take a close look at them.”

The museum is planning to hold a special exhibition this summer to commemorate the 40th anniversary of the start of the serialization of Barefoot Gen.