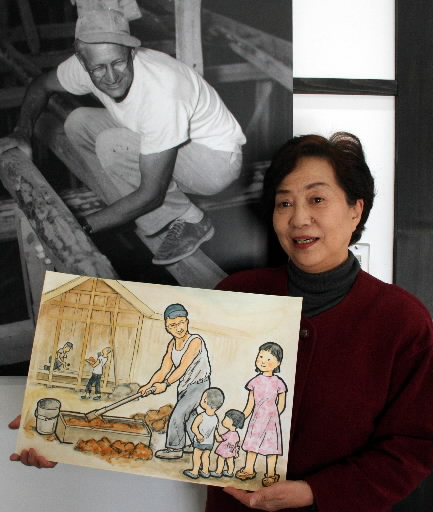 A citizens’ group in Hiroshima is creating a picture-story show about Floyd Schmoe (1895-2001), an American pacifist who constructed homes for A-bomb survivors in the city, and the members hope to complete their work in April. Through Mr. Schmoe’s life and contributions to Hiroshima, they want to convey to others the importance of building peace.

The Schmoe Association, based in Naka Ward, is led by Yoko Imada and consists of seven members. Since the opening of the Schmoe House in November 2012, the members of the group have been serving as volunteer guides to the facility, located in Eba Nihonmatsu, and engaging in related activities.

The group was founded in 2004 with three people who are members of the Hiroshima Peace Volunteers, which provides volunteer guides at Hiroshima Peace Memorial Museum, in order to convey Mr. Schmoe’s contributions to the city.

The group’s picture-story show is comprised of 11 picture-story cards, which were created in soft watercolor by one of Ms. Imada’s friends. The story begins with the atomic bombing, when Hiroshima was reduced to charred ash. Floyd Schmoe, who solicited donations for the survivors, then comes to Japan to help in person. A subsequent scene features Hiroshima residents, seeing Mr. Schmoe struggle to carry construction materials on a two-wheeled cart, coming to feel warmth for him. The local residents then start to assist Mr. Schmoe in his efforts.

The members of the group began working on their picture-story show in the spring of 2011. They based the story on accounts told by the people who lived in the houses Mr. Schmoe built and other sources.

After the piece is completed, the group plans to present it at nursery schools, kindergartens, and other sites in Naka Ward. “I would like many people to know about Mr. Schmoe and his spirit,” Ms. Imada said. “He devoted his life to supporting the A-bomb survivors, his actions transcending nationality and ethnicity.”

Floyd Schmoe
Floyd Schmoe was an American pacifist who dedicated himself to such efforts as building homes for the sufferers of war in Hiroshima, in the aftermath of the atomic bombing, and in South Korea following the Korean War. Between 1949 and 1953, he and his supporters constructed a total of 21 “Hiroshima Houses” in the city, including residences and meeting places. Of this number, Mr. Schmoe donated 16 of the buildings to the City of Hiroshima. In 1983, he was named an Honorary Citizen of Hiroshima for his contributions to the city. He passed away in 2001 at the age of 105.