Mayors for Peace holds gathering of Japanese membership in Nagasaki 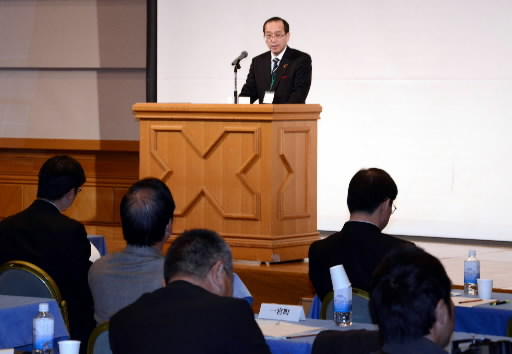 Mayors for Peace, for which Hiroshima Mayor Kazumi Matsui serves as president, opened its second meeting of its Japanese membership at a hotel in Nagasaki on January 17. At the two-day gathering, the participants will discuss such issues as replacing the term “mayors [shicho in Japanese]” to “heads of local governments” [shucho in Japanese] to encourage more wards, towns, and villages in Japan to join the organization, and implementing measures to strengthen the group’s operations.

On the meeting’s first day, a total of 46 heads of cities, wards, and towns in 20 prefectures took part. In his remarks, Mr. Matsui said, “The average age of the A-bomb survivors is now over 78. I would like to combine our strength to help realize our desire to abolish nuclear weapons.” A report from the city of Hirakata, Osaka Prefecture, which has been engaged in such efforts as staging symposiums on peace-related themes and handing down the memories of wartime experiences, was also provided at the meeting, along with other pertinent information.

On January 18, the meeting’s second day, the organization will engage in full-scale discussions. The idea of modifying the name of the organization was included in the agenda after more than one member city made this proposal at the previous meeting of the Japanese membership.

In addition, the participants will also discuss such new measures as collecting an annual membership fee to enhance the group’s operations, distributing seeds from A-bombed trees to each city, and sharing fire from the Flame of Peace located in Hiroshima Peace Memorial Park. The specifics that have been agreed to will then be brought to the general meeting of Mayors for Peace, scheduled for August in Hiroshima.