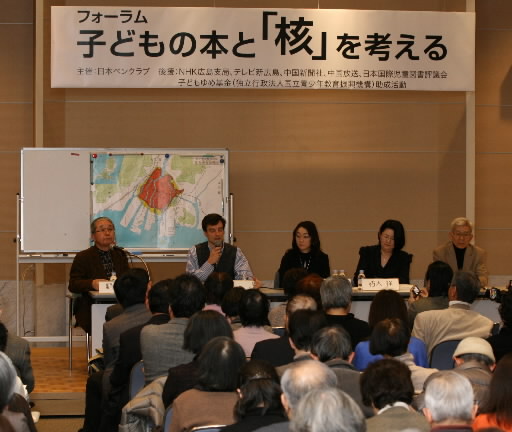 On January 26, a forum titled “Reflecting on Children’s Books and Nuclear Energy,” organized by the Japan P.E.N. Club, was held at Hiroshima Peace Memorial Museum. Authors and other figures who have published work on the atomic bombings and war for young people following the Great East Japan Earthquake gathered at the event to share their views. About 180 people took part.

In his keynote speech, Jiro Asada, the president of the Japan P.E.N. Club, reported on current conditions in Fukushima and Chernobyl, which suffer lingering consequences from the accidents at nuclear power plants. “We must confront these accidents at nuclear power plants as an ethical challenge that the generations of our children and grandchildren must continue to address, instead of merely discussing issues of economic efficiency and safety.”

At the symposium moderated by author Akira Nogami, four authors and poets of children’s literature took the podium. Hiroko Reijo, who took up the dummy atomic bombs, dubbed “pumpkin bombs,” in her work, said, “My work has received a stronger response from teachers at the elementary and junior high school levels than from elementary school students, who I had presumed were my readers.” Sho Kutsuki stated, “Being able to share the suffering felt by others is the power of literature.”

Author Masamoto Nasu, who is also an A-bomb survivor, expressed joy at the fact that “The number of younger writers who are taking on the challenge of the atomic bombings and war has grown.” In an appeal to the participants, poet Arthur Binard said, “Writers have the responsibility of using words which can see straight through to the real nature of the atomic bombings and nuclear power from the perspective of ordinary citizens.”