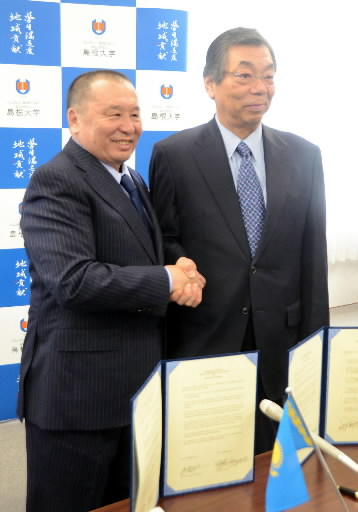 On January 28, Shimane University concluded an exchange agreement with Semey State Medical University, located in Semey (formerly Semipalatinsk), Kazakhstan. The two institutions will pursue such activities as dispatching doctors to enhance the quality of medical treatment for radiation sufferers—victims of the more than 450 nuclear tests conducted by the former Soviet Union—and engaging in joint research on low-dose radiation exposure, which has become a challenge following the accident at the Fukushima No. 1 (Daiichi) nuclear power plant. The signing ceremony was held on the campus of Shimane University, located in Matsue, Shimane Prefecture.

Yoshihiro Noso, 62, a specialist in surgical oncology, and others who have provided support to the country for many years, served to link the two institutions in the midst of a situation where the number of cancer patients in the vicinity of the nuclear test site has been surging, despite the fact the site closed back in 1991.

Shimane University will receive young doctors from Kazakhstan and offer them training, as well as dispatch oncologists abroad to help diagnose and treat patients, and provide technical guidance.

The agreement also envisions utilizing materials and data concerning the radiation sufferers held by Semey State University. The two institutions will pursue joint research on the effects and mechanism of radiation exposure.

As Shimane University is located within a radius of 10 kilometers from the Shimane nuclear power plant, located in the city of Matsue and owned by the Chugoku Electric Power Company, Shotai Kobayashi, the president of Shimane University, stated following the signing ceremony: “Accumulating accurate expertise on radiation exposure is critical. Pursuing joint research, along with contributions in the field of medical treatment, are significant steps.”

Tolebay K. Rakhypbekov, the president of Semey State Medical University, expressed his hopes for the future by saying, “Scientific support from Japan, where the cities of Hiroshima and Nagasaki suffered the atomic bombings, is vital to us.”

The two institutions plan to exchange perhaps two doctors within the year.