Increased vigilance against argument in favor of possessing nuclear weapons 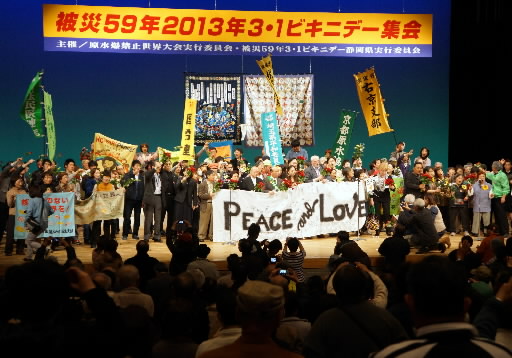 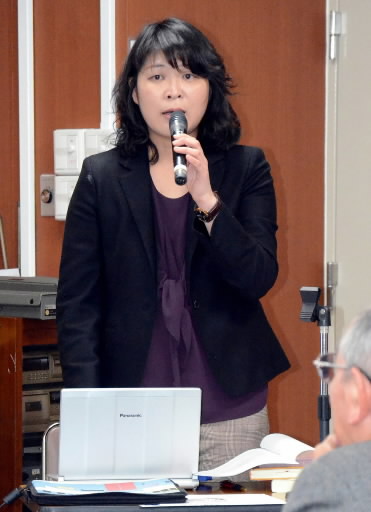 The Japan Congress Against A- and H-Bombs (Gensuikin) held its national assembly in Shizuoka City on February 28, one day prior to “Bikini Day” on March 1. On that day in 1954 the United States conducted a test of a hydrogen bomb on Bikini Atoll in the Marshall Islands in the Pacific Ocean. Fallout from the test contaminated the Daigo Fukuryu Maru (Lucky Dragon No. 5), a Japanese tuna fishing boat.

About 250 people attended the assembly. With regard to the Liberal Democratic Party’s return to power, Koichi Kawano, chairman of Gensuikin, said, “The effort to change the Constitution for the worse is gaining momentum, and a stronger case may be made for the possession of nuclear weapons. We must take the lead in the effort to eliminate nuclear weapons and nuclear power.”

In a speech to the participants, Kazuo Kato, professor emeritus at Shizuoka University of Welfare, emphasized that in the aftermath of the accident at the Fukushima No. 1 (Daiichi) nuclear power plant, “the meaning of the tests on Bikini is being questioned.” He noted that surveys in recent years have revealed the extent of the harm caused by the tests around the world. “The promotion of the peaceful use of nuclear energy lay behind the trivialization of the harm that has resulted,” he said. “We must look at Bikini as the starting point for the end of Japan’s reliance on nuclear power.”

Shiro Igarashi, president of the Fukushima Prefectural Peace Forum, said, “In Fukushima, communities are divided over issues such as compensation and the tendency to quell people’s fears.” He called for making a break with the “nuclear society,” including nuclear power, and a declaration calling on the nation to “make the disaster at Fukushima the beginning of the end of the nuclear age” was adopted.


Hiroshima Gensuikyo holds assembly: Lecturer invited
In conjunction with “Bikini Day” on March 1, the Hiroshima Council Against A- and H-Bombs (Gensuikyo) held a gathering in Hiroshima’s Higashi Ward on February 28. Hiroko Takahashi, a researcher in American history and assistant professor at Hiroshima City University’s Hiroshima Peace Institute, delivered a speech to an audience of about 70 people.

Ms. Takahashi said that while conducting repeated tests of hydrogen bombs on Bikini Atoll and other sites in the Pacific from March through May 1954, the U.S. measured the amount of radiation at 122 spots around the world. As she displayed official U.S. documents containing the results of those measurements, Ms. Takahashi said, “After the tests, ‘ashes of death’ [radioactive fallout] were dispersed throughout the world.”

She also presented statements made by the chair and other members of the U.S. Atomic Energy Commission during those years. “While it was aware of the harmful effects of radiation, the U.S. government lied, saying there was no problem,” Ms. Takahashi said. In light of the accident at the Fukushima No. 1 (Daiichi) nuclear power plant, “we must not underestimate the harmful effects of radiation,” she said. She called on Hiroshima to “make known the seriousness of the harm caused by nuclear weapons and nuclear energy and promote an awareness that human beings cannot coexist with them.”