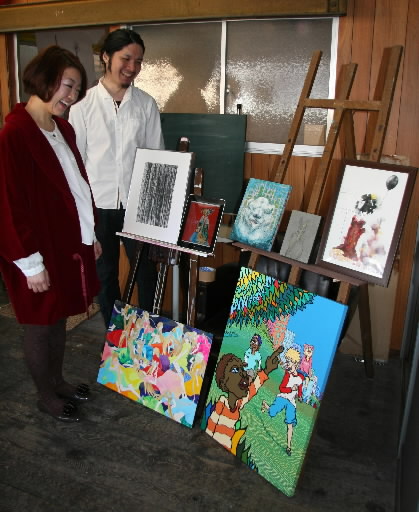 On March 2 and 3, a group of young artists from Hiroshima’s “Project NOW!” will hold an art exhibition at a civil society forum in Oslo, Norway. The theme of the forum is the inhumanity of nuclear weapons and the artists will show works imbued with messages designed to fire the imagination of visitors and heighten their awareness of nuclear issues.

Eight members of the group, in their 20s and 30s, will display nine works of art, including at least one oil painting and other paintings done in watercolor, on the theme of “nuclear weapons and I.” In a piece entitled “Dripping Water,” created by Chikara Yasui, 27, black water streams down a canvas filled with smiles, as if smothering them. “I sought to depict how people’s daily lives, before they know it, can be shattered by invisible radioactivity,” explained Mr. Yasui.

Also conveying the horror of nuclear weapons, as well as hope for the future, are a painting entitled “The Sky Where Flame Dwells,” in which the artist made a self-portrait that shows no expression, against a crimson backdrop, and a work called “Blooming Sprouts” with its image of plant life.

“Project Now!” was established in 2010, inspired by a proposal made by Steven Leeper, chair of the Hiroshima Peace Culture Foundation. In 2011, the group published an art book on the theme of a nuclear weapons convention. The group holds exhibitions three or four times a year.

Tomoko Kakeda, 31, one of the artists traveling to Oslo, said, “As someone who was born and raised in Hiroshima, I’ve tried to express my anger and my wish for nuclear abolition in my work. Through our paintings, I hope people from a lot of countries will come to think of nuclear issues as personal concerns.”

The forum is organized by the International Campaign to Abolish Nuclear Weapons (ICAN), a non-governmental organization headquartered in Australia. The organization plans to hold a lecture, a workshop, and a discussion session at the forum. On March 4 and 5, following on the heels of the forum, the Norwegian government will hold an international conference, also in Oslo, on the same theme.