Film which depicts Hiroshima prior to the A-bombing is donated to Truman Library in U.S. 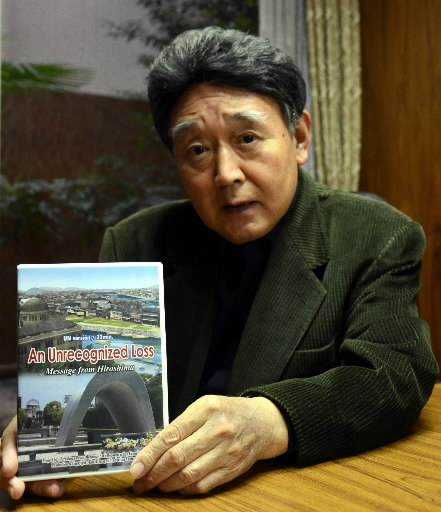 Masaaki Tanabe, 75, a filmmaker living in Nishi Ward, Hiroshima, has donated a film to the Harry S. Truman Library and Museum in which the appearance of the hypocenter area prior to the atomic bombing was restored via computer animation. The facility, located in the U.S. state of Missouri, preserves historical records related to Mr. Truman, the American president who ordered the A-bomb attacks. According to Mr. Tanabe, the film can be accessed by visitors in the near future.

Mr. Tanabe donated a DVD of the English version of the film, entitled “Message from Hiroshima: What was Lost in the Bombing.” The film, which runs 32 minutes, was completed in 2010 and depicts the former Nakajima District (now the location of Hiroshima Peace Memorial Park), a bustling part of the city before the atomic bomb exploded overhead.

The Harry S. Truman Library and Museum is an archive of materials from the former president’s time in office, and related items.

Through an acquaintance, Mr. Tanabe learned that the library was interested in his film. He then sent a letter, and the DVD, to the director, saying, “I would like to convey the truth of the A-bombed city of Hiroshima, to help prevent such a tragedy from being repeated.”

On March 2, the library sent an email message to Mr. Tanabe, informing him that “the film will be included in the library’s collection, enabling visitors to access it.”

When Clifton Truman Daniel, 55, the grandson of U.S. President Harry S. Truman, attended Hiroshima’s Peace Memorial Ceremony last August, Mr. Tanabe gave him a copy of the same DVD. “To help realize a world without nuclear weapons, I would like a lot of people in the United States to see the film,” Mr. Tanabe said.