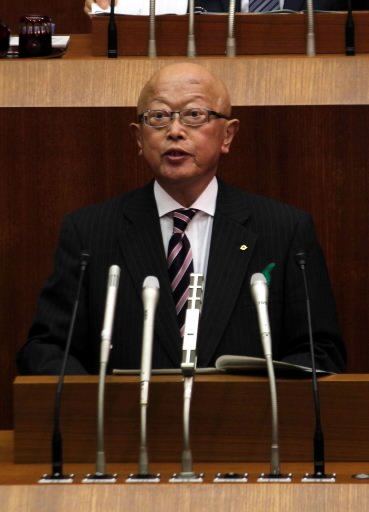 On March 4, Shigetaro Yamamoto, the governor of Yamaguchi Prefecture, spoke at a session of the prefectural assembly on the matter of extending the license for landfilling work at a publicly-held seabed (in Kaminoseki, Yamaguchi Prefecture) where the Chugoku Electric Power Company is seeking to build a nuclear power plant. The governor announced officially that he will postpone his decision on whether or not to approve the extension. In the meantime, the prefectural government will set aside the expiration of the license and has asked the Chugoku Electric Power Company to provide additional documentation within one year.

The governor made his remarks in response to a question posed by a member of the Liberal Democratic Party. Mr. Yamamoto stressed the need to permit the Chugoku Electric Power Company some time to demonstrate how its new nuclear power station at Kaminoseki would accord with the nation’s energy policy.

Mr. Yamamoto said he will ask the Chugoku Electric Power Company to provide a fifth round of supplementary information within roughly one year. Although the time limit on whether or not to approve the license passed at the end of February in accordance with the prefectural government’s internal regulations, the governor responded to this by saying, “Because this is a special case, it is vital to extend the time frame involved in processing the license.”

Last October, after a plenary session of the prefectural assembly, reporters asked about how the prefecture would react to an application seeking an extension of the license. At the time, Mr. Yamamoto answered, “The prefectural government would not approve such a request.” This time, however, the governor made a contradictory statement.

The public relations division of the Chugoku Electric Power Company stated: “We understand that the governor’s answer was based on the fact that the national energy policy has not been settled. We will continue to watch the moves of the central government and respond to the deliberations in an appropriate manner.”

Shigetaro Yamamoto, the governor of Yamaguchi Prefecture, has postponed his decision on whether or not to extend the license for landfilling work at a publicly-owned seabed where the Kaminoseki nuclear power plant would be constructed. Behind the governor’s stance seems to be his desire to observe the moves of the new central government led by the Liberal Democratic Party. The new government is currently reviewing the policy of “zero nuclear power plants” that had been set by the previous administration, made up of the Democratic Party of Japan. However, the shift in direction by the governor, who had clearly stated previously that he would “not approve” the extension of the license, heightens the sense that the prefectural government is following the lead of the central government on such issues and could stir distrust among the people of the prefecture.

Mr. Yamamoto was elected for the first time in the gubernatorial election held last summer by pledging to pursue the same policy as former governor Sekinari Nii, who had expressed support for letting the license expire. At the prefectural assembly, too, Mr. Yamamaoto had followed the policy set by former Governor Nii who had voiced his desire “not to approve the extension under the current circumstances.”

Although Mr. Nii faced resistance from the Liberal Democratic Party in the prefectural assembly, which had backed his election, the former governor demonstrated independence in his actions concerning the license. In contrast to Mr. Nii, Mr. Yamamoto appears to be hesitant about making a final decision, due in part to the aftershocks of the political change that came to the central government at the end of last year. A senior official of the prefecture disclosed that the prefectural government is reluctant to make a decision regarding the development of the Kaminoseki nuclear power plant before the central government has weighed in, saying, “Although the plan is unsettled, this doesn’t mean that it has been scrapped.”

Some observers believe that Mr. Yamamoto is unable to ignore the intentions of the Liberal Democratic Party, which backs the governor, and the Abe administration (Prime Minister Shinzo Abe is from Yamaguchi), with the governor referring to Yamaguchi Prefecture as being “under the foot of Prime Minister Abe.” His decision to postpone the outcome also suits the interests of the Chugoku Electric Power Company, which hopes to move forward with the construction of the nuclear power station at Kaminoseki.

How much consideration has Mr. Yamamoto given the citizens of the prefecture in his decision, however? While the governor virtually corrected his comment made last October, when he indicated that he would not approve the extension of the license, his words as governor carry weight. There is no denying that the wishes of the people, who harbor uneasiness over the nuclear power plant, have been left behind amid the political posturing.