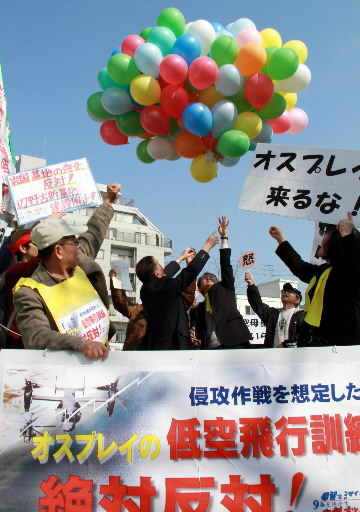 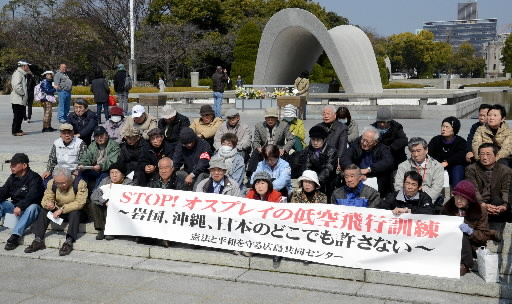 With training flights involving the U.S. military’s new MV-22 Osprey transport aircraft scheduled to start on March 6 on the Japanese mainland, voices of opposition were raised in Iwakuni, Yamaguchi Prefecture, where the U.S. Marine Corps Air Station Iwakuni is located. Members of citizens’ groups and other participants held rallies and demonstrations on March 5 to protest the low-altitude training flights and training flights at night. They also called for the training flights around the base to be monitored for their duration, until March 8.

Hiroshi Kawai, 76, the leader of the protest rally in front of Iwakuni City Hall, where about 90 people gathered, said, “We must join hands with the people of Okinawa and get the Osprey out of Japan.” He also urged the crowd to monitor the flights around the Iwakuni base on March 7 and 8. The participants flew balloons to indicate the altitude of the Osprey’s flights (150 meters or higher during the day; 300 meters or higher at night) and called out, “Let our voices of opposition to the Osprey be heard all over Japan.” The four groups taking part also held protest rallies in Iwakuni on the evening of March 5.

The City of Iwakuni, which received letters of appeal from the four groups, urging the city to forbid the training flights, discussed the issue at a meeting of an association comprised of the Yamaguchi Prefectural Government and municipalities in the vicinity of the Iwakuni base. The association has decided to have employees of the prefectural and city governments monitor the training flights around the base through their duration. They will take heed of any flights over densely populated areas, or in vertical-takeoff mode outside the base, which could violate the agreement between Japan and the United States concerning this issue.

About 100 members of the JR West Labor Union held a rally, too. They staged a protest march of about three kilometers to a bank located on the north side of the military base.

On March 5, Hiroshima was the scene of a protest by A-bomb survivors and members of citizens’ groups. The participants held a sit-in demonstration, then a march, to appeal for the cancellation of the training flights and the Osprey’s deployment in Japan.

About 40 members of the group called the “Hiroshima Center to Protect the Constitution and Peace,” consisting of 20 organizations including the Hiroshima Prefectural Confederation of A-bomb Sufferers Organization, chaired by Kazushi Kaneko, and the Hiroshima Council Against A- and H-Bombs (Gensuikyo), carried out the sit-in at the Cenotaph for the A-bomb Victims in Hiroshima Peace Memorial Park. The demonstration, with the participants hoisting a banner of protest, lasted for 30 minutes. They also adopted a resolution urging the Japanese government to act so that the United States will withdraw its deployment of the aircraft.

Along the Hondori shopping street in downtown Hiroshima, about ten people from a citizens’ group called “Peace Link Hiroshima-Kure-Iwakuni” distributed flyers expressing opposition to the Osprey. Using a microphone to make their appeal, they said, “Dangerous training flights are being forced upon us. Hiroshima, as a city of peace, must not ignore this situation.”