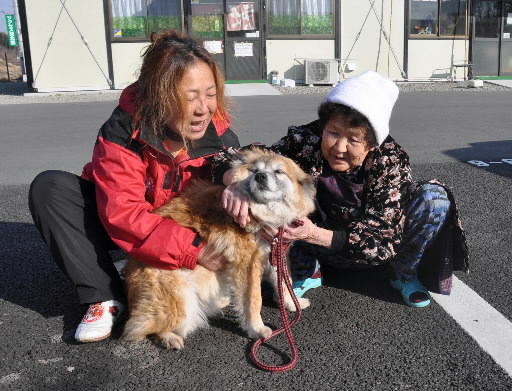 Sheltered by NPO based in Asa Kita Ward

On March 6, two dog owners living in temporary housing in Fukushima City were temporarily reunited with their pets, which are being sheltered by a local animal rescue organization. Cat and Dog Rescue Party Minashigo, a non-profit organization based in Hiroshima’s Asa Kita Ward, took in a total of approximately 1,400 dogs and cats from the disaster area following the accident at the Fukushima No. 1 (Daiichi) nuclear power plant. An event introducing the group’s activities will be held in Hiroshima’s Naka Ward on April 6.

On the morning of March 6, Yuri Nakatani, 50, the group’s director, brought Pochikko to temporary housing to visit her owner, Satsuki Sugano, 85. “How have you been?” asked Ms. Sugano with a big smile on her face. She pulled her old dog close and held her tight, and Pochikko licked Ms. Sugano’s face, happy to see her again.

Ms. Sugano evacuated from the town of Iitate in Fukushima Prefecture. Because pets are not allowed in temporary housing, she put her dog in the care of the animal rescue organization in May 2011.

“I wonder if the day will come when we can go back to Iitate together,” Ms. Sugano said. That evening Ms. Nakatani returned to get Pochikko, and he and Ms. Sugano resumed their separate lives. That same day an elderly man was also temporarily reunited with his dog.

Of the dogs and cats from the disaster area that the rescue organization has taken in, approximately 500 have been returned to their owners. Another 900 are in the group’s shelter in Asa Kita Ward or in foster homes around the country. They are reunited with their owners once every two or three months.

“In addition to the stress of life as evacuees, owners who are separated from their pets feel as sad as if they had lost a family member,” said Ms. Nakatani. “I want to continue to take care of their animals and put their minds at ease.”

The special event will be held at 1:30 p.m. on April 6 at the Chugoku Shimbun Hall in Hiroshima’s Naka Ward. It is being organized by volunteers in Hiroshima who support Minashigo’s activities. The event is part of the “Campaign to Bring Hope and Cheer,” which supports schools and children in the disaster area. The campaign is sponsored by the Chugoku Shimbun and the Chugoku Shimbun Dealers Association. At the event Ms. Nakatani will give a talk on the value of the lives of animals, and a play will be performed.

An exhibition of photographs on the animal rescue organization’s activities will also be held in the Chugoku Shimbun Building from April 1-12. For further information, please call: (082) 236-2555.