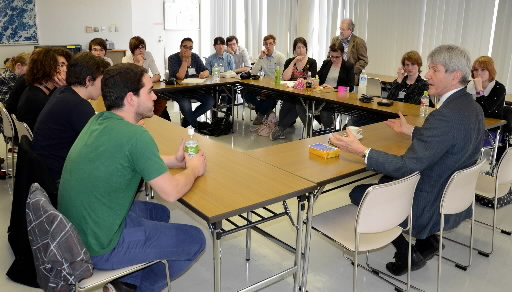 On March 8, 13 German youths who are now serving as volunteers at welfare facilities in Japan visited Hiroshima Peace Memorial Park and learned about the damage wrought by the atomic bombing and the peace-related efforts being made in Hiroshima. In 2011, Germany made the decision to end the use of nuclear energy and suspend conscription into its armed forces. How do these German youths view the attitude of the Japanese government toward nuclear energy and the nation’s defense?

The 13 German men and women range in age from 18 to 24. They arrived in Japan last September, with the assistance of the German government, and now work at welfare facilities and a youth hostel in four prefectures, including Hiroshima and Osaka. When conscription was still active in Germany, conscientious objectors were obliged to serve as volunteers in the welfare field. Though the nation suspended its draft two years ago, it has continued to support the volunteer work by those who are interested in pursuing such service.

On March 8, the young Germans toured Hiroshima Peace Memorial Museum. The group also listened to a talk given by Steven Leeper, chair of the Hiroshima Peace Culture Foundation, and the testimony of an A-bomb survivor. At the meeting with Mr. Leeper, the participants eagerly asked him such questions as what he thought they could do to help press the nuclear powers to give up their nuclear arms.

Corinna Michaeli, 19, who works at a kindergarten in Asaminami Ward, Hiroshima, wondered why Japan, which suffered both the atomic bombings and the nuclear accident at the Fukushima No. 1 (Daiichi) nuclear power plant, continues to rely on the use of nuclear energy. She added that Japan should serve as a model for the world in shifting to renewable energy sources.

Yasemin Schönfelder, 21, who works at a youth hostel in the city of Osaka, raised Prime Minister Shinzo Abe’s idea, for which he has expressed enthusiasm, of transforming the Self-Defense Forces into a national defense force. She lamented the notion, calling it unfortunate if Japan sought to return to the sad past.

The group of German youths will continue their peace-related studies in Hiroshima through March 14.