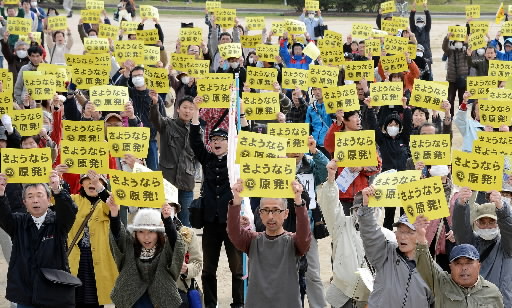 On March 10, a number of rallies held by citizens’ groups opposed to nuclear energy took place in the Chugoku region. The participants appealed for the trend to continue toward the elimination of the nation’s nuclear power stations amid political conditions in which the goal of “zero nuclear power plants” is now fading. This aim had been advocated by the previous administration, led by the Democratic Party of Japan.

According to the organizer, about 1,500 people gathered at Hiroshima City Chuo Park in downtown Hiroshima. Sunao Tsuboi, 87, the chairman of the Hiroshima Prefectural Confederation of A-bomb Sufferers Organizations and one of those who spearheaded the event, said to the crowd, “Let us join hands with the people of Fukushima and make our voices of opposition to nuclear energy heard.” Haruko Moritaki, the co-chair of the Hiroshima Alliance for Nuclear Weapons Abolition, stressed, “Since the change of administration, there has been movement in favor of nuclear energy. We must continue to speak out.”

Kumiko Okamoto, 38, who evacuated with her family from Motomiya, Fukushima Prefecture to Nishi Ward, Hiroshima, expressed her concerns over the health of children affected by the accident at the Fukushima No. 1 (Daiichi) nuclear power plant. The participants at the rally appealed for an end to the use of nuclear energy in Japan by holding signs that read “Farewell Nuclear Energy!”

At the Chuo community center in Kaminoseki, Yamaguchi Prefecture, where the Chugoku Electric Power Company seeks to construct a new nuclear power plant, about 300 people called for this plan to be quashed. The rally was organized by four groups, including an association comprised of Iwaishima islanders who are determined to stop the nuclear power station in Kaminoseki from being built.

Toshiyasu Shimizu, 58, the leader of the association, stressed, “We will continue to fight until the plan is called off.” Hiroyuki Okamoto, 53, the chair of the Yamaguchi Congress Against A- and H-Bombs, leveled criticism against Prime Minister Shinzo Abe, who has made a turnabout from the policy of “zero nuclear power plants,” which includes the power station at Kaminoseki. Mr. Okamoto pointed out, “The idea is growing that the Japanese economy is unsustainable without nuclear energy.”

A rally also took place in front of the JR Matsue Station in Matsue, Shimane Prefecture, with the participants appealing for the elimination of nuclear energy. Voicing their opposition to the restart of the No. 1 and No. 2 reactors, as well as the start of the No. 3 reactor, at the Shimane nuclear power plant, located in Matsue, they called out, “The accident in Fukushima must not be forgotten.”