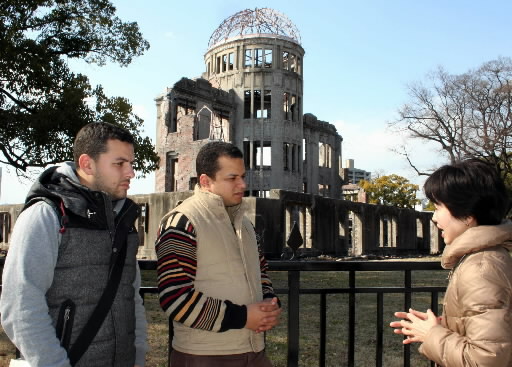 Two Egyptian journalists, reporting on the damage caused by the atomic bombing of Hiroshima, paid a visit to Peace Memorial Park and Peace Memorial Museum recently.

Mohamed Daoud, 27, a newscaster, and Assem Ghorab, 27, a photographer, stopped at such memorials as the Children’s Peace Monument, standing in the park, and Shima Hospital, located near the park and known as the bomb’s hypocenter. Mariko Miwa, 59, a guide and interpreter who resides in Hiroshima, escorted them to the memorials to provide explanation about the damage. Mr. Ghorab expressed interest in the city’s reconstruction from the ruins of the A-bomb attack, saying, “Hiroshima has been rebuilt into a beautiful city since the time of the bombing. I hope that cities in my country will become cities of peace, like Hiroshima.”

The pair then visited the headquarters of the Chugoku Shimbun newspaper. Akira Tashiro, the executive director of the Hiroshima Peace Media Center, a wing of the Chugoku Shimbun, described the newspaper’s coverage of the atomic bombing, peace issues, and radiation-damaged sites across the world as a result of nuclear weapons development.

“I realized that the media has a significant role to the play in the Middle East, which is still suffering from turmoil,” Mr. Daoud said. “Through this visit to the A-bombed city, I also recognized for the first time that the damage done by radiation from the development of nuclear weapons and accidents at nuclear power plants has continued for a long, long time.”

The two journalists paid a visit to Japan of about one week from mid-February as part of the Middle East Journalist Invitation Program, sponsored by the Tokyo-based Sasagawa Peace Foundation. The foundation has commissioned the Middle East Institute of Japan, also located in Tokyo, to administer the program.