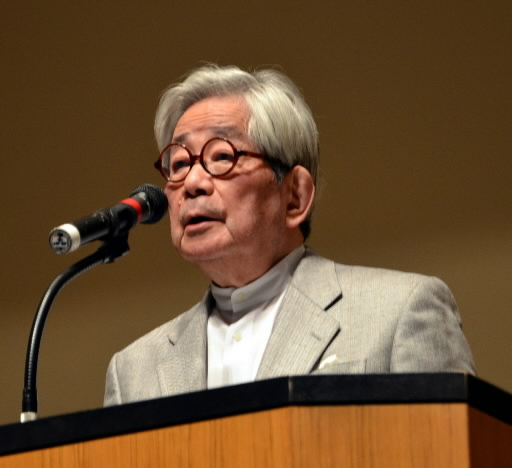 On March 11, the second anniversary of the nuclear accident at the Fukushima No. 1 (Daiichi) nuclear power plant, Kenzaburo Oe, a Nobel Prize-winning author, and others who have been engaged in a petition drive to end Japan’s use of nuclear energy, held a gathering in Tokyo called “Goodbye Nuclear Power Plants lectures: Let us connect to Fukushima!” The petition drive, organized by the group “Goodbye Nuclear Power Plants” and known as the “Petition for Realization of Denuclearization,” is seeking 10 million signatures.

Approximately 1,200 people attended the gathering. Satoshi Kamata, a nonfiction writer and one of those who spearheaded the event, addressed the audience, saying, “The Abe administration is talking solely about the economy. But we would like to show the world that life is more important than economics. We would like our efforts to lead to the enactment of a law which abandons the use of nuclear power.”

While Mr. Oe touched on the stiff costs involved in eliminating nuclear energy, he appealed to the crowd, “As Japanese people, who have preserved the memories of Hiroshima and Nagasaki, we have no option but to face the nuclear problem in Fukushima as well.”

Ryuichi Sakamoto, a musician, held a talk with a member of a rock band of younger musicians. Looking back on a music event that he organized on March 9 and 10 in Tokyo, Mr. Sakamoto expressed his sense of crisis about the restart of nuclear power plants across Japan, saying, “I wish we were living in a society where musicians could just play music, but our society isn’t like that now.”

Shuji Shimizu, a participant from Fukushima, is a professor at Fukushima University and a specialist in local public finance. “The stress levels of both those who evacuated, and those who didn’t, have increased,” he said. “Even two years after the accident occurred, the damage continues to spread.” Hisae Sawachi, a writer, also appeared as a speaker at the gathering.