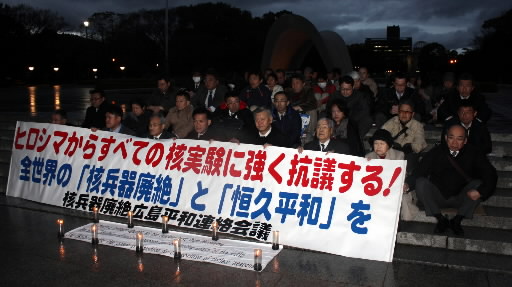 On March 13, A-bomb survivors of Hiroshima, among other participants, staged a sit-in protest at Hiroshima Peace Memorial Park after learning that the United States conducted several nuclear experiments, using a new technique, between last October and December in order to test the performance of their nuclear weapons.

The roughly 60 participants at the sit-in were members of the Hiroshima Peace Liaison Conference for Nuclear Abolition, which consists of the Hiroshima Prefectural Confederation of A-bomb Sufferers Organizations chaired by Sunao Tsuboi, the Hiroshima Local of Japanese Trade Union Confederation, and other entities. They seated themselves in front of the Cenotaph for the A-bomb Victims for about 30 minutes from 6 p.m., holding a banner that read “We, from the A-bombed city of Hiroshima, strongly protest against all nuclear tests!”

On March 12, it was revealed that the United States had carried out the nuclear tests. Mr. Tsuboi, 87, said, “We will continue raising our voices, without losing hope, until nuclear weapons are gone from the world.” Kazukiyo Ishii, 58, the chair of the Hiroshima Local of Japanese Trade Union Confederation, stressed, “The U.S. nuclear tests go against international public opinion, which is earnestly calling for a world without nuclear weapons.”