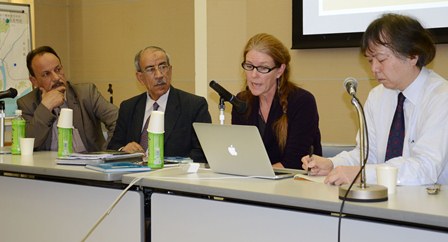 On March 17, days before March 20, the tenth anniversary of the start of the Iraq War, an international symposium of Iraqi doctors and other participants was held in the east wing of Hiroshima Peace Memorial Museum in downtown Hiroshima. Two Iraqi doctors who treat cancer patients in Iraq spoke out about the dangers of depleted uranium (DU) weapons, known as “radioactive weaponry.”

Dr. Kareem Al-emara, 49, a colleague of Dr. Al-ali, also condemned war, nuclear weapons, and DU. Prior to the symposium, he paid a visit to Fukushima Prefecture, site of the accident at the Fukushima No. 1 (Daiichi) nuclear power plant, and he offered his impressions of this trip, voicing his concern about the effects of radiation. Ms. Isabel Macdonald, a peace activist from Costa Rica, a country that has outlawed DU weapons, also provided a report.

The symposium was organized by the “NO DU Hiroshima Project,” a Hiroshima-based citizens’ group, and was attended by about 40 people.