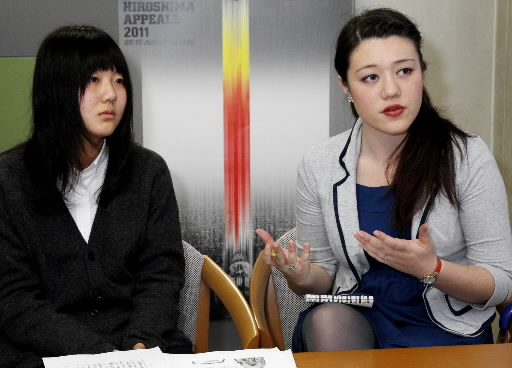 Thirteen students from the School of Journalism at Indiana University, located in the United States, paid a visit to Hiroshima to cover stories on individually-selected themes. Janica Kaneshiro, 19, a freshman at the university, interviewed Mako Sakamoto, 16, to learn about how Hiroshima youth are working to convey the importance of peace. Ms. Sakamoto is a first-year student in high school and serves as a junior writer for the Chugoku Shimbun.

Ms. Sakamoto shared an article that she wrote about the Children’s Peace Monument. The monument was erected through the efforts of classmates of Sadako Sasaki, a girl who died of leukemia ten years after the atomic bombing, an illness induced by the bomb’s radiation. Ms. Sakamoto touched upon her interview with Sadako’s friend, telling Ms. Kaneshiro, “I was moved by the story of one classmate, who expressed regret at not being able to fulfill a promise to visit Sadako every day at the hospital.”

To build peace, Ms. Sakamoto stressed, “It’s important to communicate what I’ve learned through my activities, and work together with one another.” She added, “When there is conflict, we have to solve the problem through dialogue rather than military force.”

The students from Indiana University arrived in Japan on March 9 and spent about a week gathering information on the history of the atomic bombing and World War II in order to write their stories. They also interviewed A-bomb survivors and sufferers of the Great East Japan Earthquake. They will complete their articles after returning to the United States.