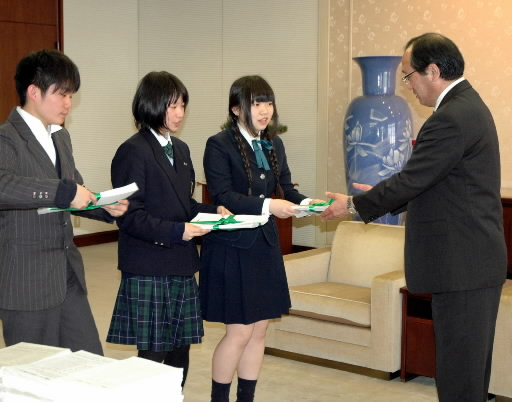 On March 18, 18 students at three high schools in Hiroshima Prefecture handed Hiroshima Mayor Kazumi Matsui a total of 58,463 signatures in support of abolishing nuclear weapons. These students are from Hiroshima Jogakuin High School in Naka Ward, AICJ Senior High School in Asaminami Ward, and Eishin Gakuen in Fukuyama. The signatures were collected with the cooperation of their peers across the country. The students requested that Mr. Matsui submit them to the United Nations.

The 18 students reported on the year-long campaign called “Nuclear Abolition Now! Signature Drive by Junior and Senior High School Students,” an effort that involved students at 37 junior and senior high schools across Japan. The students expressed such sentiments as: “I want to see nuclear weapons abolished in my lifetime” and “Nuclear weapons are not needed in this world. I will encourage younger students to also take up this cause.”

Mr. Matsui told the students, “I will help you convey your messages to the world.”

This annual signature drive was first launched in 2008 by students from Hiroshima and Okinawa prefectures. It then spread across the country. Kanna Inoue, 17, head of last year’s organizing committee, said, “Our effort may be one small step, but I believe it will help lead to nuclear abolition.”