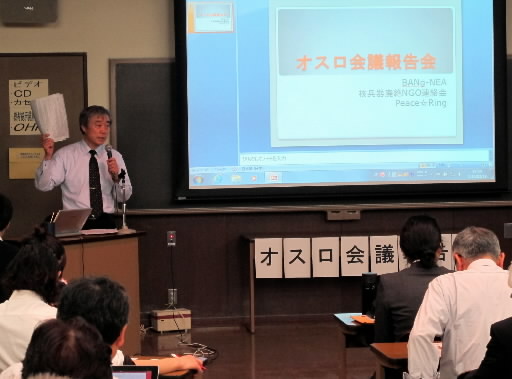 On March 19, a gathering took place in Tokyo to convey the outcome of an international conference on the inhumanity of nuclear weapons that was organized by the Norwegian government and held in Oslo. A representative of a non-governmental organization (NGO) and a member of the Japanese delegation to Oslo, among others who attended the conference, shared the main points of the discussions there. About 50 people, mostly college students, learned about the global trend of nuclear abolition.

The gathering was organized mainly by “BANg-NEA,” a network of Japanese and Korean youth in pursuit of a “nuclear-free Northeast Asia.” Six speakers, including Akira Kawasaki, executive committee member of Peace Boat, a Tokyo-based NGO, and Terumi Tanaka, secretary general of the Japan Confederation of A- and H-bomb Sufferers Organizations, addressed the audience.

Reflecting on the conference, Mr. Kawasaki stressed that a shift is taking place from the current “order,” which has been led by the nuclear weapon states, to new norms that will be set by non-nuclear weapon states. He also said that the damage wrought by radiation released as a result of the nuclear accident at the Fukushima No. 1 (Daiichi) nuclear power plant was a frequent topic of conversation during the conference in Oslo.

Kenichi Okubo, secretary general of the Japan Association of Lawyers Against Nuclear Arms, explained that he had spoken out about the importance of remembering the A-bombed cities of Hiroshima and Nagasaki. He also pointed out, “The cruelty of nuclear weapons, which indiscriminately stole away so many lives and still torments A-bomb survivors even 68 years after the bombings, should be the central premise of our thinking about nuclear issues.”