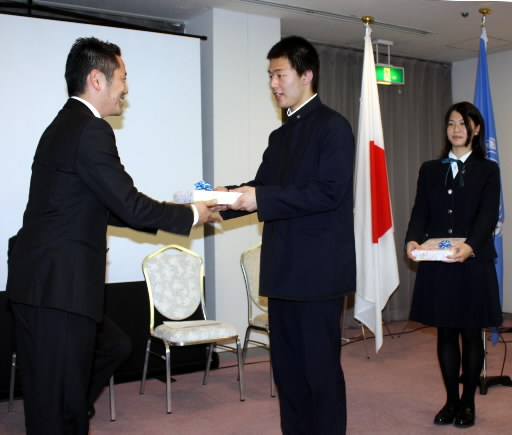 The Hiroshima Office of the United Nations Institute for Training and Research (UNITAR) has selected two high school students to serve as Youth Ambassadors for fiscal 2013. The appointment ceremony was held on March 19 at the International Conference Center Hiroshima.

The new ambassadors are Sae Murai, 17, and Yuki Yanagawa, 16. They have been chosen from among 24 high school students in Hiroshima Prefecture who submitted essays on such themes as Hiroshima’s contributions to global peace. Ms. Murai is a resident of Asakita Ward, Hiroshima and a second-year student at Hiroshima Jogakuin High School. Mr. Yanagawa is a resident of the city of Etajima and a first-year student at Hiroshima Gakuin High School. At the ceremony, Ms. Murai stated, “I intend to discuss issues involving peace and war with people from different countries and learn about diplomacy.” Mr. Yanagawa said, “I will ponder what peace is and share my thoughts with people from around the world.” The pair each received an iPad from Makoto Fukagawa, the president of Marimo Co., Ltd., a condominium development company based in Nishi Ward, Hiroshima.

The UNITAR Youth Ambassador Programme was launched in 2010 with a view to developing Hiroshima’s human resources for contributions in the area of peace-oriented diplomacy. During their one-year term of service, starting in April 2013, the new ambassadors will receive training at the Ministry of Foreign Affairs and U.N. agencies and take part in study sessions held by the UNITAR Hiroshima Office.