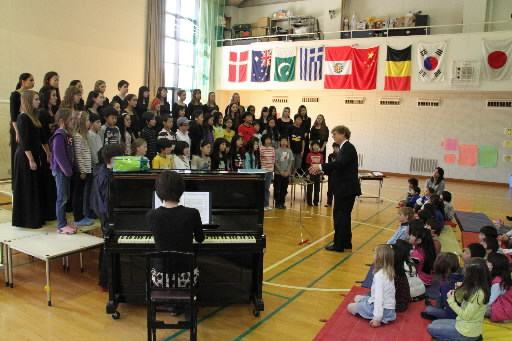 On March 21, a high school choir from the U.S. state of California visited Hiroshima International School in Asakita Ward, Hiroshima, and sang for the students there.

Twenty-eight members of the Westridge School Choir, along with three teachers, paid a visit to Hiroshima International School. In front of about 100 students, the chorus group sang seven songs, in Latin and Japanese, including “Amazing Grace” and the Japanese song “Hamabeno Uta” (“Beachside Song”). Students of both schools also sang songs together.

The American choir is staying in Japan from March 17 to 27, giving concerts and chorus get-togethers mainly in Tokyo and Kyoto.