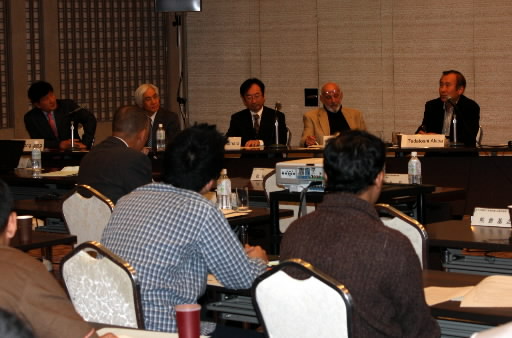 On March 25, the 3rd International Symposium of the Global Environmental Leaders Education Program was held at the International Conference Center Hiroshima. The theme of the gathering was “Nuclear Power Policy and Low Carbon Society in Asia.” The participants at the symposium pondered the modality of nuclear energy from the standpoint of curbing emissions of carbon dioxide. Hiroshima University, which is promoting a low-carbon society and has received a grant for its research, was the organizer of the event. The participants discussed the roles to be played by scientists and the Japanese government with Japan’s nuclear policy now wavering in the wake of the nuclear accident at Fukushima No. 1 (Daiichi) nuclear power plant.

During the panel discussion, former Hiroshima Mayor Tadatoshi Akiba, one of the five panelists and now a specially appointed professor at Hiroshima University, voiced doubts about the use of nuclear energy. He posed the question: “Is it right for us, ethically, to live wealthy lives while leaving behind an enormous amount of radioactive waste for future generations?”

Naoto Kasahara, a professor at the University of Tokyo and head of the Department of Nuclear Engineering and Management in the School of Engineering, said, “We must analyze the cause of the nuclear accident and pass on this information to the next generation and other nations.” Tae Yong Jung, a professor at KDI School of Public Policy and Management in Korea, spoke about the effectiveness of renewable energy, while Woody Epstein, a visiting professor at École Polytechnique in France, an institution of higher education, appealed for a national debate in Japan on nuclear energy.

Kenji Kamiya, director of Hiroshima University’s Research Institute for Radiation Biology and Medicine, touched on a health survey of residents in Fukushima Prefecture, which he helped pursue. “We would like to make good use of the expertise of the A-bombed city of Hiroshima,” he said.

Since fiscal 2008, Hiroshima University has been engaged in a program intended to develop human resources, called the “Global Environmental Leaders Education Program for Designing a Low Carbon Society.” About 90 people, including researchers, attended the symposium.