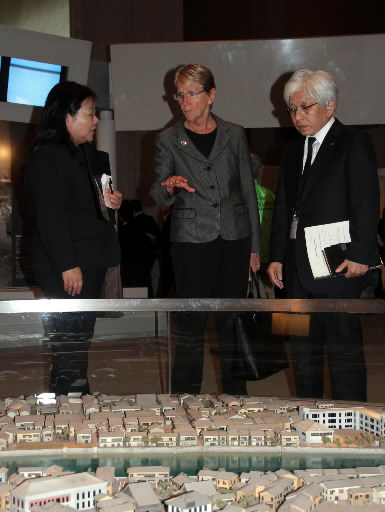 Sally Fegan-Wyles, executive director of the United Nations Institute for Training and Research (UNITAR), headquartered in Geneva, Switzerland, visited Hiroshima on April 26. This is her first visit since she took up the post last October. Discussing the UNITAR Hiroshima Office established ten years ago, Ms. Fegan-Wyles said that training programs in Hiroshima will be expanded to enhance the development of human resources dedicated to rehabilitating areas that have suffered conflict.

Ms. Fegan-Wyles, who is from Ireland, paid a visit to Hiroshima Peace Memorial Park and offered flowers at the Cenotaph for the A-bomb Victims. She made a tour of Hiroshima Peace Memorial Museum, guided by museum director Kenji Shiga, and listened to the A-bomb account of Keiko Ogura, 75, who experienced the atomic bombing while in the Ushita area (now part of Higashi Ward), 2.4 kilometers from the hypocenter.

Wiping at teary eyes, Ms. Fegan-Wyles said that she was deeply moved by the sight of a charred lunch box on display in the museum. She stressed that visiting Hiroshima is a very important experience and that she would like to boost UNITAR’s efforts to send more trainees from conflict zones to Hiroshima.

UNITAR is responsible for cultivating human resources from developing countries that are members of the United Nations. The Hiroshima Office, which opened in 2003, is mainly involved in bringing government officials from the Asia-Pacific region to Hiroshima as trainees.