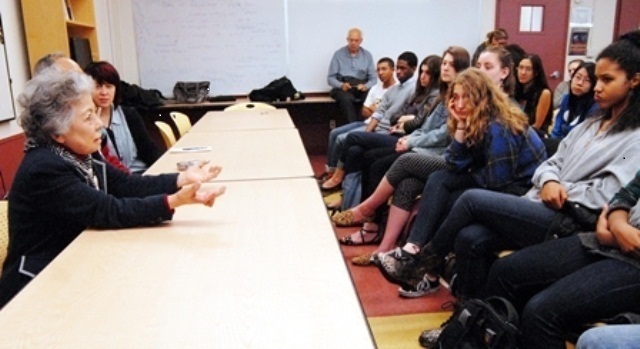 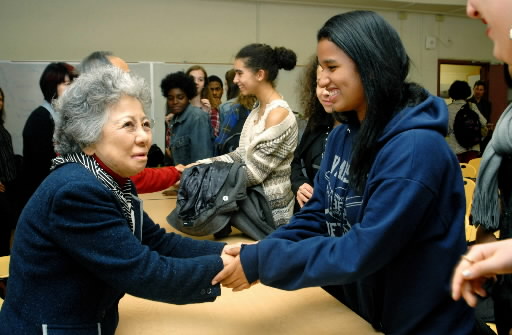 NEW YORK—On April 29, A-bomb survivors who experienced the atomic bombing of Hiroshima, along with the grandson of former U.S. President Harry Truman, who ordered the A-bomb attacks, addressed an audience of about 200 high school students at Brooklyn Friends School in New York City and conveyed the tragic consequences wrought by the bombing. The gathering was organized by "Hibakusha Stories,"a New York-based NGO.

Lee Jongkeun, 84, a Korean A-bomb survivor who lives in Hiroshima, shared his A-bomb account, saying that he hovered between life and death as a result of burns suffered in the blast. When a student suggested that possessing nuclear arms keeps nations at peace, Mr. Lee promptly and categorically rejected this notion.

Shigeko Sasamori, 80, who experienced the atomic bombing of Hiroshima and now lives in Los Angeles, stressed the importance of peace, saying that people have died in larger numbers in war than in any other disasters and that the world will face disaster if this state of affairs persists.

Clifton Truman Daniel, 55, the grandson of former U.S. President Harry Truman, was asked if he felt any ill will toward his grandfather. Mr. Daniel replied that it was a different time and that his grandfather was forced to make a difficult decision.

After the talks, the students eagerly shook hands with the A-bomb survivors and other participants. Ms. Sasamori said, “The students listened to me in a serious manner, so I feel hopeful about peace. I’ll go anywhere in the world to share my experience. This is my mission.”

Jade Hodge-Pollard, 15, a high school student, said she thought that spreading the stories of the A-bomb survivors would help lead to peace.