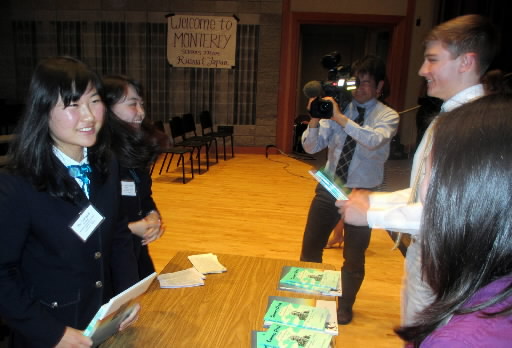 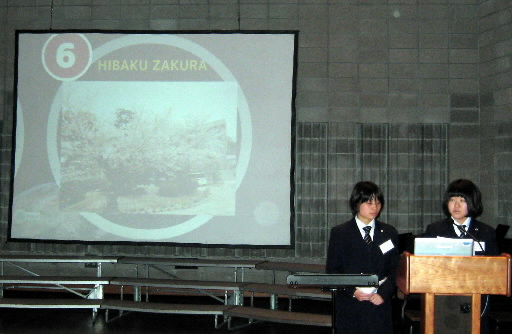 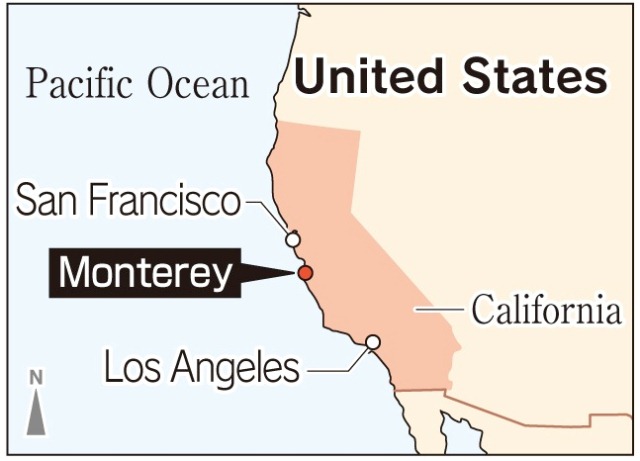 Four high school students from the A-bombed city of Hiroshima joined a conference on nuclear disarmament education held on April 19 and 20 in Monterey, California. They are students of Hiroshima Jogakuin High School and Yasuda Girls’ High School, both located in Naka Ward, Hiroshima. Based on their peace education studies, as well as experiences in connection with the Great East Japan Earthquake, the Hiroshima students presented ideas for helping to create a world without nuclear weapons.

The Monterey Institute of International Studies sponsored the gathered, which was geared to high school students. Students from eight high schools in the United States, one school in Russia, and three schools in Japan, including Kwassui High School in Nagasaki City, offered 25-minute presentations on the theme of developments, prospects, and challenges in the quest to abolish nuclear arms.

Ayuna Ito, 17, a third-year student at Yasuda Girls’ High School, and Momoko Awaya, 17, a third-year student at the same school, said they were impressed by TV commercials that were produced in the wake of the Great East Japan Earthquake, in which show-business personalities appealed, “Let’s stick together.” The two Yasuda students screened a short, three-minute film they had created which featured people calling for the enactment of a nuclear weapons convention. According to participants at the event, the audience showed keen interest in the presentations made by the students from the two Hiroshima schools.

Last winter both schools solicited applications from students who were interested in taking part in the conference. To prepare for the event, the students undertook such tasks as writing reports in English on themes that included conditions involving nuclear issues and the efforts for nuclear non-proliferation made by non-governmental organizations (NGOs) and civil society since the Cold War.

Ms. Awaya said, “Though nuclear disarmament is strongly affected by nations and their conditions, I’ve learned the importance of individuals taking action, too.” Ms. McCauley added, “I was able to meet students in Monterey who share the same interests. I’ll do my best to tell others about the activities that we’ve been pursuing, things involving international cooperation and visiting the memorials in Hiroshima Peace Memorial Park.”