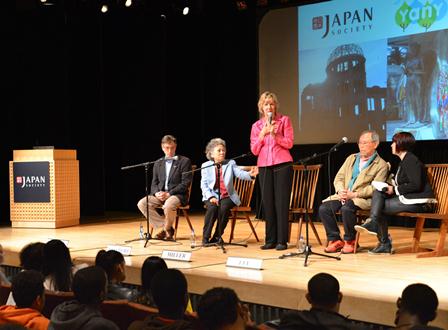 NEW YORK—On May 2, Clifton Truman Daniel, 55, the grandson of Harry Truman, the former U.S. president who ordered the atomic bombings of Hiroshima and Nagasaki, was interviewed in New York City. Mr. Daniel revealed his intention to visit Hiroshima and Nagasaki in June, following his first visit to Japan last year.

Mr. Daniel plans to spend one week in each A-bombed city and listen to accounts from A-bomb survivors. Although he met with survivors last August, he said that the sessions lasted only a short time. He said that this visit, with the idea of writing a book, he would like to learn such details as the survivors’ lives prior to the war and their parents’ names. Mr. Daniel will be accompanied on this trip by his son Wesley, 24.

Mr. Daniel also mentioned that he plans to videotape his interviews with the survivors so they can be made available to the public at the Harry S. Truman Library and Museum located in the U.S. state of Missouri.

Mr. Daniel also spoke at the Japan Society on May 2, along with Cynthia Miller, 67, the daughter of an engineer who worked on developing the atomic bombs during World War II, and A-bomb survivors. They addressed about 150 high school students who had gathered at the New York-based organization, which strives to deepen mutual understanding between Japan and the United States.

Shedding tears, Ms. Miller said that she would like to apologize to the Japanese people for her father’s contribution to the bombings. She stressed the horrific nature of nuclear weapons and radiation, saying that her health has been poor for decades, including severe headaches, which she believes is linked to the radiation her father was exposed to during the roughly 130 nuclear tests he observed.