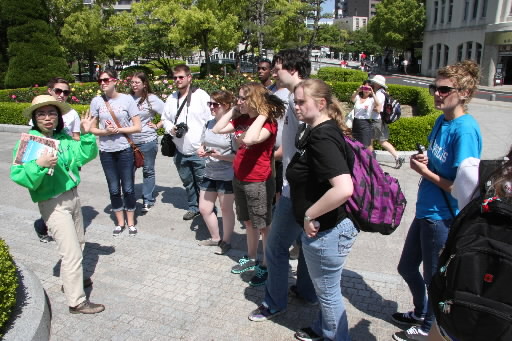 A group of 12 students from the University of Indianapolis, in the U.S. state of Indiana, paid a visit to Hiroshima Peace Memorial Park on May 12. They have come to learn about the damage caused by the atomic bombing and consider the preciousness of peace. During their stay in Hiroshima, lasting until May 15, they will visit Hiroshima Peace Memorial Museum and listen to the account of an A-bomb survivor.

Guided by a Peace Volunteer from the museum, the students made stops at an A-bombed aogiri tree, or Chinese parasol tree, the Children’s Peace Monument, and the Atomic Bomb Dome. In front of the Cenotaph for the A-bomb Victims, their guide explained that the Pond of Peace was constructed on the north side of the cenotaph because many people died while seeking a drink of water. The students then offered a silent prayer for the victims.

Joshua McMahan, 21, a junior at the university, said that each monument symbolizes the sorrow of the atomic bombing and the hope for peace. He added that, during his stay in Hiroshima, he would like to learn how to help build peace in the world.

This visit is part of the Hiroshima-Nagasaki Peace Study Course, which the cities of Hiroshima and Nagasaki have promoted for a course offering at universities in and out of Japan. This is the third visit to Hiroshima by students from the University of Indianapolis; the first was in 2010 and the second in 2012. The students will visit Nagasaki from May 17 to 19.