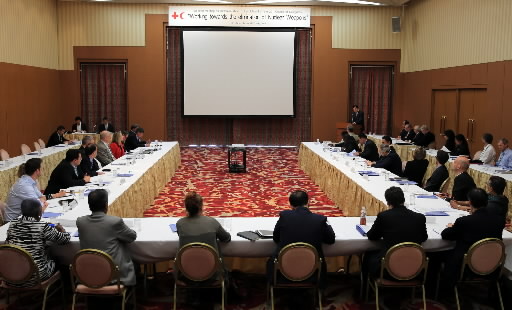 An international conference to consider the course to nuclear abolition opened at a Hiroshima hotel on May 15. At this gathering, organized by the Red Cross and Red Crescent Societies of 24 nations and the International Committee of the Red Cross (ICRC), a draft action plan for the elimination of nuclear arms, emphasizing the inhumanity of these weapons, will be produced.

The three-day conference will close on May 17. At the opening ceremony, Tadateru Konoe, president of the Japanese Red Cross Society, said to the participants, “We would like to learn much from Hiroshima and take another step forward.” Referring to the fact that the international community has begun to appeal for nuclear abolition by stressing the inhumane nature of nuclear weapons, Hiroshima Mayor Kazumi Matsui stated that he would like to lend his support to this new movement so that the human race can have a brighter future.

Discussion was held on the current state of nuclear weapons in the world. The participants acknowledged that a new trend toward nuclear arms reduction was kindled by the resolution on the inhumanity of nuclear weapons that was adopted by the council of delegates of the Red Cross and Red Crescent Societies in November 2011.

The action plan compiled on the last day of the conference will be presented to the next council of delegates. This is the first international Red Cross conference to be held in Hiroshima. It has also featured a screening of an animated film about Dr. Marcel Junod, who was sent by the ICRC to Hiroshima in the aftermath of the atomic bombing.