103 volumes of register for A-bomb victims are aired 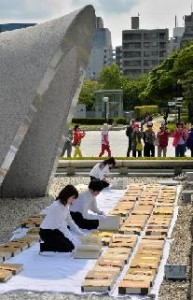 Eighteen city employees and others removed 102 volumes of the register from a stone chest beneath the cenotaph. These volumes contain the names of 280,959 people who were exposed to the atomic bombing of Hiroshima and passed away as of August 5, 2012. After placing them on a piece of white cloth laid out in front of the cenotaph, the workers carefully turned the pages one by one and checked for damage. One more volume, with the names of nine Nagasaki atomic bomb victims whose names were dedicated to the cenotaph at the request of family members, was also aired.

Kaede Miyagawa, 14, a third-year student from a junior high school in Kuromatsunai, Hokkaido, who was visiting the park on a school trip, observed the work and said, “Many ordinary people like us became the victims of the atomic bombing. I feel grateful for peace.”

Two hours later, the volumes, except one for the Hiroshima victims and one for the Nagasaki victims, were returned to the stone chest. The City of Hiroshima will add to these volumes the names of those who passed away since August 6 of last year, or whose deaths were newly confirmed, and dedicate the register to the cenotaph during the Hiroshima Peace Memorial Ceremony this August 6.