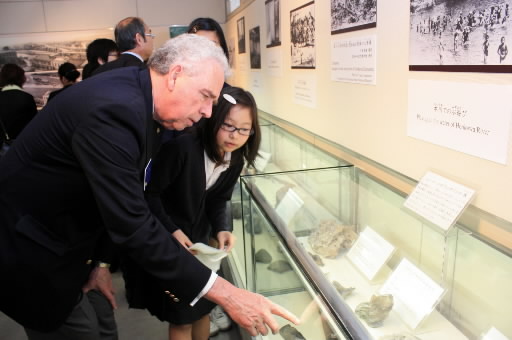 The Rotary Global Peace Forum, a gathering of members from rotary clubs in and out of Japan, will take place at the International Conference Center Hiroshima on May 17 and 18. The participants will discuss peace building activities in people’s ordinary lives and local communities. On May 16, some participants visited Honkawa Elementary School, which has preserved part of its original A-bombed school building, located near Peace Memorial Park, to take part in an exchange with students at the school and engage in other activities.

About ten forum participants toured the school’s Peace Museum, established on the school grounds. They were offered explanations from students about a panoramic model which shows the cityscape of Hiroshima in the aftermath of the atomic bombing and glass melted by the bomb’s heat. John Best, 72, a director of Rotary International, said that the students have learned a lot about the atomic bombing and he felt their passion for peace.

Sakuji Tanaka, 74, the president of Rotary International, met with Hiroshima Mayor Kazumi Matsui at Hiroshima City Hall. He stressed the significance of discussing peace issues in the A-bombed city of Hiroshima and handed the mayor a copy of the program brochure.

The headquarters of Rotary International is located in the U.S. state of Illinois and has approximately 1.2 million members residing in some 200 countries and regions. About 2,500 people will take part in this gathering. Luis Giay, 73, chair of the Global Peace Forums, said that he hopes everyone involved will think keenly about peace so the tragedy suffered by Hiroshima will never occur again.