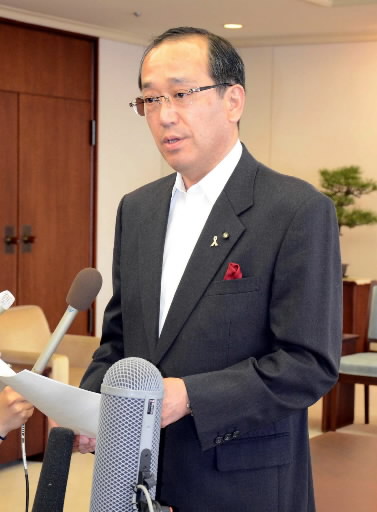 On May 23, Hiroshima Mayor Kazumi Matsui and A-bomb survivors in Hiroshima expressed outrage at a column in the Korea Joongang Daily, a Korean newspaper, which called the atomic bombings of Hiroshima and Nagasaki “divine punishment.” They lamented the escalating exchange of words over Japanese and Korean perceptions of history.

Mr. Matsui criticized the column sharply, saying, “I can’t bear to read it.” He then appealed to the writer to “stop hurting the feelings of A-bomb survivors and Japanese and Korean people who are seeking to abolish nuclear weapons and put an end to nuclear sufferers.”

Referring to the atomic bombings, the writer for the Korea Joongang Daily closed by stating: “God may feel that retaliation against Japan hasn’t been complete.” Sunao Tsuboi, 88, chair of the Hiroshima Prefectural Confederation of A-bomb Sufferers Organizations, looked askance at the tone of the argument that almost condoned the massacre of non-combatants. He stressed, “We cannot achieve lasting peace unless we overcome this type of thinking.”

Yukio Yoshioka, 83, vice chairman of the other faction of the Hiroshima Prefectural Confederation of A-bomb Sufferers Organizations, chaired by Kazushi Kaneko, mentioned the Japanese government’s stance on its responsibility for the war. He also referred to the words and deeds of Japanese Prime Minister Shinzo Abe and Osaka Mayor Toru Hashimoto, co-leader of the Japan Restoration Party, and said, “Because these people make comments heedless of history, they’ve ended up engaging in mud-slinging.”

Jeong Gihwa, 54, secretary general of the Special Committee Seeking Measures for the Korean A-bomb Victims, while acknowledging that he understood the author’s attempt to press Japan to change its view of history, criticized the article, saying that there was no justification for victimizing innocent civilians. Lee Sil Gun, 83, chair of the Council of Atom-bombed Koreans in Hiroshima, also said, “It’s wrong to mix up the history of the colonial occupation and the atomic bombings.”