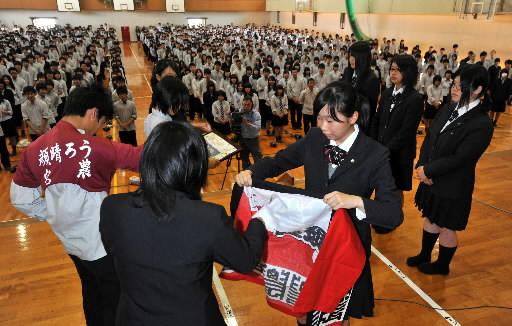 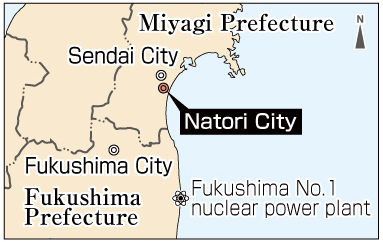 On May 24, four third-year students from Miyagi Agricultural High School in Natori, Miyagi Prefecture visited Hiroshima for a reunion with students from Itsukaichi High School, located in Saeki Ward, Hiroshima. The last time they met was six months ago. The school buildings of Miyagi Agricultural High School were overwhelmed by the tsunami of March 2011, triggered by the Great East Japan Earthquake, and the school had no choice but to move to a different site. In November 2012, students from Itsukaichi High School paid a visit to the school when they traveled to the devastated region to lend support to the victims. On this occasion, the students from Miyagi Prefecture learned about the damage wrought by the atomic bombing of Hiroshima, including the effects of radiation, and the two sides shared thoughts on reconstruction.

The students from Miyagi also shared views with the 13 students from Itsukaichi High School who visited Miyagi Prefecture last fall, discussing ideas for disseminating information about the atomic bombing and helping to reconstruct the stricken eastern Japan region. Asked how this recovery can be realized at the earliest possible date, the students from Miyagi said they were concerned about the reputation of agricultural produce grown in the area where the accident at the Fukushima No. 1 (Daiichi) nuclear power plant occurred. They urged the students in Hiroshima to consume, without worry, the products that have met safety standards.

The students at Itsukaichi High School screened a documentary that had been created by the school’s broadcasting club, whose members interviewed an A-bomb survivor who operated a streetcar in the aftermath of the atomic bombing, despite suffering personal injury. They also shared the damage left by the blast and the sentiments of those who lent support to the reconstruction of the A-bombed city.

The students and principal of Miyagi Agricultural High School were invited to Hiroshima as part of an effort called the “Deliver Hope and High Spirits Campaign,” pursued by the Chugoku Shimbun and other entities lending support to the earthquake zone. On May 25, at 1 p.m., they will take part in a symposium entitled “Toward a Nuclear-free World: Spreading Hiroshima’s Message,” held at the International Conference Center Hiroshima, and report on current conditions in their area. The symposium is being organized by the Hiroshima Peace Creation Fund, Hiroshima International Culture Foundation, and the Chugoku Shimbun. Students from Itsukaichi High School will also share impressions of their visit to the hard-hit region. Entry is free and simultaneous interpretation is available.