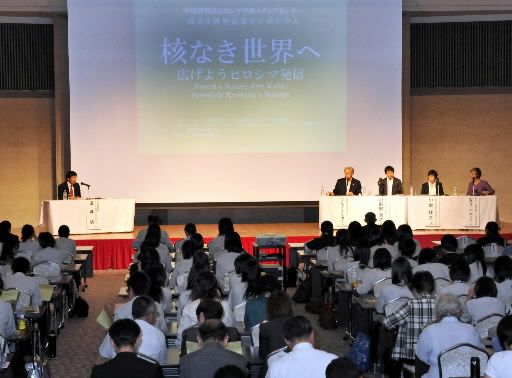 On May 25, a symposium to mark the fifth anniversary of the founding of the Hiroshima Peace Media Center, a wing of the Chugoku Shimbun, was held at the International Conference Center Hiroshima. Under the theme “Toward a Nuclear-free World: Spreading Hiroshima’s Message,” the panelists at the symposium discussed the role of the A-bombed city of Hiroshima in advancing toward the abolition of nuclear weapons. About 400 people were in attendance.

David Krieger, the president of the Nuclear Age Peace Foundation, a U.S.-based organization, gave the keynote address. He criticized the Japanese government’s decision not to lend its support to a joint statement on the humanitarian impact of nuclear weapons that was submitted at April’s Preparatory Committee for the Nuclear Non-proliferation Treaty (NPT) Review Conference. Mr. Krieger said that the A-bombed nation of Japan must help lead the movement to eliminate nuclear arms and called on the public to press the Japanese government, which ignores the voices of the A-bomb survivors, more strongly.

During the panel discussion, Keiko Ogura, the head of the Hiroshima Interpreters for Peace (HIP), linked her own A-bomb experience to the idea of inviting young people from overseas to Hiroshima and encouraging them to share what they learn here back in their home countries.

Takayuki Koasano, the leader of CANVaS, a group engaged in exchanges with the people of Kazakhstan, stressed, “We must emphasize how inhumane nuclear weapons are by working together at the grassroots level.” In Kazakhstan, a long series of nuclear tests by the former Soviet Union have left over one million people suffering from the consequences of radiation exposure.

Nassrine Azimi, senior advisor to the United Nations Institute for Training and Research (UNITAR), appealed to the participants to be more active in spreading the spirit of Hiroshima to the world. Hiroshima forgives but can never forget, she said.

Reports were also presented by youth engaged in peace activities, including students from Miyagi Agricultural High School in Natori, Miyagi Prefecture, where school buildings were destroyed in the Great East Japan Earthquake, and students from Itsukaichi High School in Saeki Ward, Hiroshima.

The symposium was organized by the Hiroshima Peace Creation Fund, the Hiroshima International Culture Foundation, and the Chugoku Shimbun.