Hiroshima ranked No. 1 at travel site for two years in a row 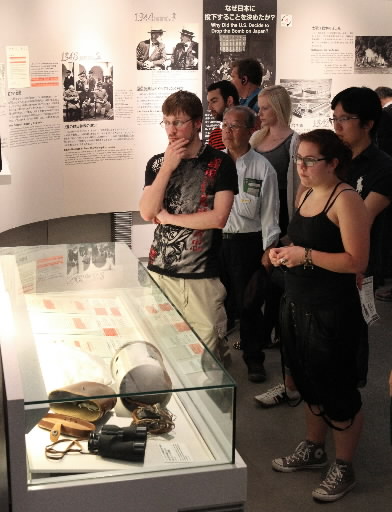 Hiroshima, with Peace Memorial Museum and the Atomic Bomb Dome in the heart of the city, has been ranked No. 1 for two years in a row as the most popular destination among places in Japan for international travelers. This ranking is compiled by TripAdvisor, the world’s largest travel site, using reader feedback. The island of Miyajima, with Itsukushima Shrine, located in Hatsukaichi, Hiroshima Prefecture, is ranked No. 4 in the latest poll. The two World Heritage sites found in Hiroshima Prefecture--the A-bomb Dome and Itsukushima Shrine--are attracting more foreign visitors than many other major sightseeing spots in Japan.

On May 30, roughly 6,000 people visited Peace Memorial Museum and about 370 of these were visitors from overseas. They gazed intently at a panoramic model which depicts the cityscape of Hiroshima in the aftermath of the atomic bombing and artifacts left by A-bomb victims. Robert Ellis, 57, an office worker from the U.S. state of Alabama, said that he was moved to learn the details of what had happened in Hiroshima.

TripAdvisor, operated by a U.S. company, is a travel site accessed by 200 million people a month. The website ranked Hiroshima and the sites of Peace Memorial Museum and the A-bomb Dome as No. 1 for the second time in fiscal 2012, following a No. 1 ranking in fiscal 2011, for the category “Japanese Sightseeing Spots Popular among Foreign Visitors.” Rankings are based on calculations involving the number of postings on a subject and other factors.

Foreign visitors to Peace Memorial Museum have posted such comments on the TripAdvisor site as “Everyone in the world should see it” and “You’ll be a different person after you visit the museum.” In fiscal 2012, the museum averaged a score of 4.8 on a 5-point scale. Of special note is the fact that people posting feedback often encourage others to visit the museum.

In fiscal 2012, the number of visitors to the museum from overseas was 154,340. Compared to fiscal 2011, when the number of visitors declined in the wake of the Great East Japan Earthquake, the number increased by 57,830 people in fiscal 2012. Kenji Shiga, director of Peace Memorial Museum, expressed high hopes, saying, “I’m delighted about the No. 1 ranking for the past two years. I’d like more people from abroad to learn about the reality of the atomic bombing.”

Tomoko Yamada, a professor at Hijiyama University who serves on the board of the Hiroshima Prefectural Tourist Federation, said, “After the accident at the nuclear power station, it seems awareness of nuclear energy and peace has grown among the international community.”

Regarding Itsukushima Shrine, people leaving feedback at TripAdvisor praised its scenic beauty with comments like “The shrine gate standing in the sea is fantastic.” In 2011, the number of foreign visitors to the shrine dropped to about 65,000, less than half of its peak year, but the figure rose again to about 97,000 in 2012.

Ranked No. 2 among tourist destinations in Japan was Kyoto’s Fushimiinari Shrine and No. 3 was Todaiji Temple in Nara.