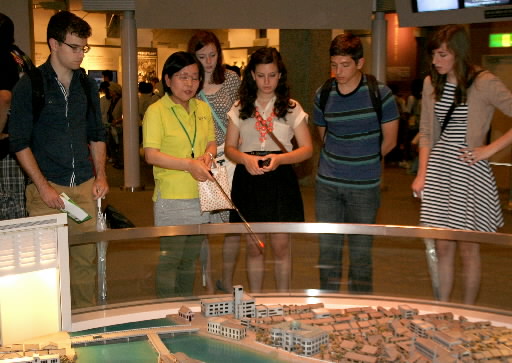 Nine university students who received National Journalism Awards this year visited the A-bombed city Hiroshima as part of their Japan study tour. They visited Peace Memorial Park and Peace Memorial Museum in downtown Hiroshima to learn about the damage wrought by the atomic bombing.

After walking through the park, visiting the Children’s Peace Monument and A-bombed aogiri (Chinese parasol) trees, they toured Peace Memorial Museum guided in English by one of the museum’s peace volunteers. The students looked at model cityscapes before and after the bombing and the clothes worn by middle school victims, then stared transfixed by pictures of badly burned A-bomb victims.

The students also visited the downtown headquarters of the Chugoku Shimbun. Akira Tashiro, executive director of the Hiroshima Peace Media Center, described the special mission of Hiroshima’s newspaper. Presenting articles and other materials to show that a large number of people in the United States were also exposed to radiation through the process of nuclear development, he encouraged the students to cover stories that delve into hidden truths.

Jessica Contrera, 21, a third-year student at Indiana University, was moved by the fact that Hiroshima so steadfastly sends its message to the world. She intends to help convey the historical reality of what she learned here.

The National Journalism Awards were established in 1984 by the Scripps Howard Foundation, based in the United States, which supports journalism education in cooperation with Indiana University. From 65 applicants working for their student newspapers or doing media internships, nine students received the award based on the excellence of their articles and other factors.

They stayed in Japan from May 25 to Jun 1, visiting Kyoto, Osaka and Tokyo, as well as Hiroshima.