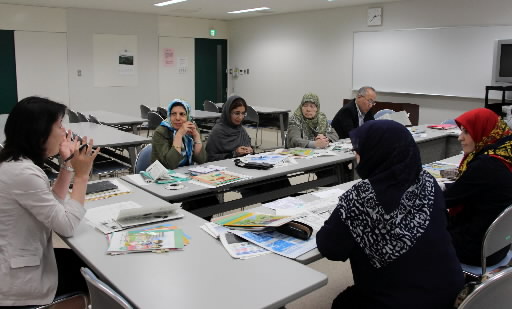 On June 3, four Iranian teachers visited Hiroshima City Hall to learn about peace education offered in the A-bombed city Hiroshima. They are in Hiroshima at the invitation of MOCT, an NPO based in Higashi Ward, Hiroshima, which has provided support to Iranian victims of poison gas.

Two Hiroshima Municipal Board of Education staff members in charge of peace education classes described the city’s peace education program, including the concern that the A-bomb experience might fade away with the A-bomb survivors. They showed the Iranians a new series of texts entitled “Hiroshima Peace Notes,” which students in the city of Hiroshima use to study peace issues ranging from the preciousness of life to the role of the A-bombed city. The new texts, which are being used through 12 years from elementary school through high school, were introduced into Hiroshima municipal elementary, junior high and high schools this fiscal year.

The Iranian teachers described their own peace education classes, which make use of drama and songs. Mahnaz Aryanfard, 56, a kindergarten director, said that she would use as a guide Hiroshima’s peace education, in which students learn not only about the atomic bombing but also about the current situation of nuclear weapons in the world.

The Iranian delegation had previously learned about peace education efforts at a peace museum in Tehran, the capital of Iran, where photographs and other materials conveying the horrific consequences of the atomic bombing of Hiroshima are displayed. They then sought cooperation from MOCT, through which their first visit to Hiroshima was realized.

The Iranian teachers arrived in Japan on May 31, touring Hiroshima Peace Memorial Museum on June 1. They will be staying in Japan through June 6, visiting various sites, including Honkawa Elementary School, also in downtown in Hiroshima.